2015 has been an interesting year. Though this year has seen the announcements of some exciting new projects in development at Disney Parks (including Star Wars Land, Toy Story Land, Frozen Ever After, Soaring Around the World and more), it has also seen its fair share of closures and questionable decisions from the parks themselves.

However, though Disney parks have given us a lot to talk about over the past 12 months, it was Disney guests that really brought the entertainment over the past year. Here are three guests who went above and beyond the call of ridiculousness in the last year, and became unwitting footnotes in Disney history along the way!

Guests have a certain amount of license to act silly on a trip to Walt Disney World. When you have the opportunity to compare muscles with Gaston, talk to a sea turtle named Crush, and crack jokes with a bunch of monsters, you’d be crazy not to take the opportunity to show your goofy side and enjoy feeling like a kid again. But that doesn’t mean you should give in to every child-like whim you experience at Walt Disney World.

I don’t think anyone who has ever roamed the World Showcase has ever looked at the towering Mexico pavilion and not wondered whether or not they could indeed scale the imposing steps that make up its imposing face. However, though most guests are content to simply walk on by this architectural marvel without acting on this impulse, one enterprising (and likely quite inebriated) individual took it upon himself to actually scale the Mexico Pavilion this past November. His feat has been preserved presumably forever in the video clip above. 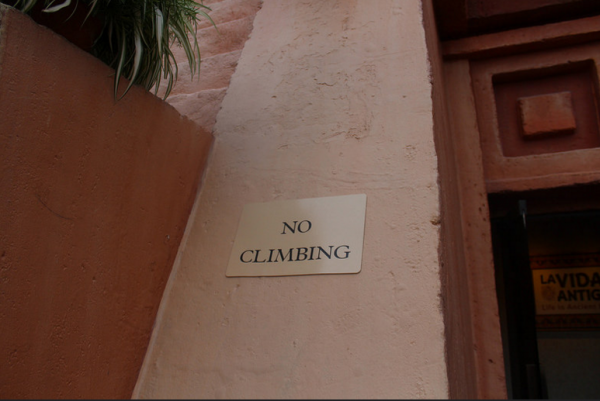 As you can see, this nimble guest actually made it quite far up the pavilion, which is especially impressive considering his likely intoxicated state. Though legend says this guest was able to give security officers the slip before they could take action, it's far more likely that this guest was actually escorted from the park, and has likely received a lifetime ban from Disney parks. However, even though this person is probably no longer allowed inside Walt Disney World, they have made a semi-permanent mark on Epcot; the Mexico pavilion now features several prominent “No Climbing” signs around the front of the building like the one pictured above. That’s one way to make an impact on Disney history…

That's responsible give the idiots what they want. Exposure