Before Universal Orlando Resort became the massive tourist destination that it is today, it was just Universal Studios Florida. And though the park had ambitions that were probably a little too lofty at first, most local residents welcomed the park with open arms. Even neighboring Walt Disney World (who tried to compete directly with Universal via its own MGM Studios park) took out a full page ad in the Orlando Sentinel welcoming Universal to the region, saying, ‘What’s good for tourism and entertainment is good for Central Florida’.

Although there has been a long tradition of “friendly” rivalries in central Florida,  Universal Orlando Resort has recently turned this practice on its head, coming out very publicly against a new project that aims to bring thrilling new attractions to Central Florida, actively campaigning to try and make sure this new attraction never opens. And their reasoning might surprise you… 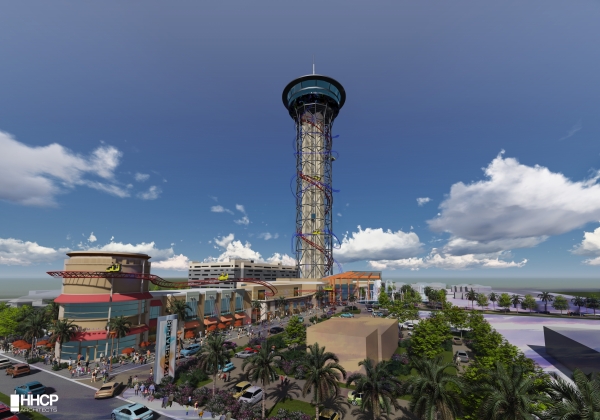 Announced last year, the original plan for SKYPLEX Orlando was to bring the world’s tallest roller coaster, The Skyscraper, to Central Florida. This 570-foot tall roller coaster was to be built off of International Drive (near Sand Lake Road) and would anchor an outdoor mall that would have shopping and dining location.

Though the plans started off pretty simply, they didn’t stay that way. In the months following its initial announcement, the project grew tremendously. A side-mounted drop ride appropriately named SkyFall was added to the lineup (similar to Zumanjaro: Drop of Doom) and zipline attraction SkyFly was also announced. 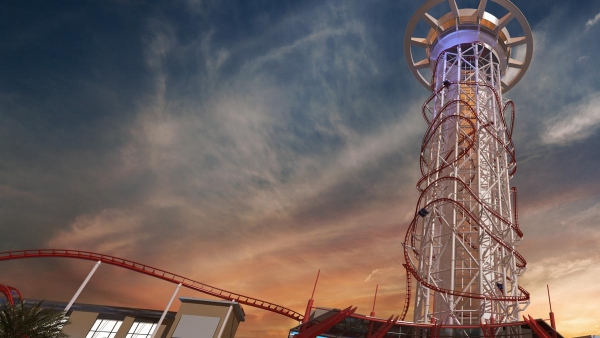 The shopping center portion of the project also grew, and the complex began referring to it as “the area’s largest indoor theme park”, announcing plans to incorporate “upscale arcading, simulators, bars, and a host of rides and games”. Plans were even made for the world’s largest Perkins as well as a 350-room hotel to sit atop the tower structure. 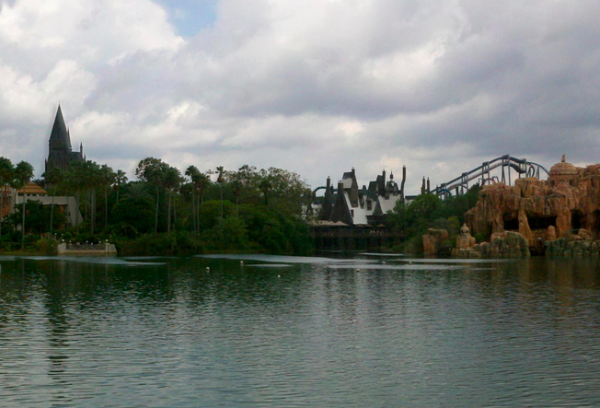 Though the developers behind the SKYPLEX project couldn’t have been more excited about its development, there was one difficulty that they didn’t anticipate: neighbor Universal Orlando Resort. Though Walt Disney World made a public show of welcoming Universal back when it opened in 1990, Universal doesn’t seem all that inclined to offer the same hospitality to a newer competitor. And the reason, they insist, isn’t fear of competition.

During a recent meeting of the Orange County’s planning and zoning board, representatives from Universal Orlando Resort said that while they support the project, they believe in imposing a strict height restriction, Of course, such a restriction would rob the SKYPLEX of all of its “world’s largest” claims, making it much less appealing to visitors. According to these representatives, such a tall structure wouldn’t be “compatible” with the surrounding I-Drive area and a tall, glowing structure would have a detrimental effect on the Orlando area skyline. 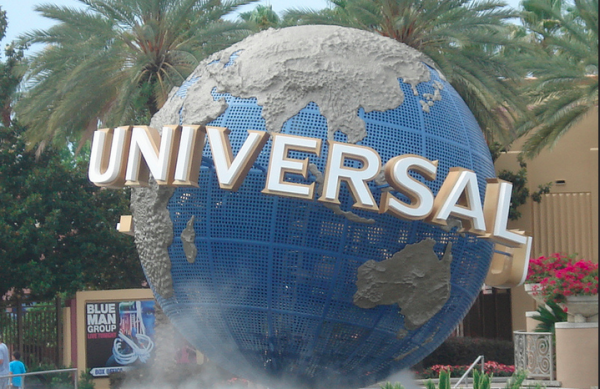 Obviously, these claims ring a little shallow (especially since the glowing 400-foot tall Orlando Eye is only a few miles away) and SKYPLEX officials were quick to label Universal representatives as “bullies” against healthy competition.

The last slide from @SKYPLEXOrlando rep saying THIS IS about competition with Universal. pic.twitter.com/nJMgpJDM33

However, despite the SKYPLEX officials’ passionate pushbacks, the Orange County planning and zoning board gave the proposed project a thumbs down. Though this isn’t a good sign, it’s not the end of the road for the project, as the ultimate fate of SKYPLEX Orlando will be decided during an Orange County commission vote, which will take place in December.

I'm fine with this not coming to Orlando. It looks almost as tacky as Fun Spot and would just be an eye sore. Plus people get bored with the basic "look how tall this coaster is" concept if there isn't decent theming to back it up

Okay, really guys? You're definitely showing some bias against Universal here. If this was going down anywhere within earshot of a Disney park, the Mouse would be doing the same exact thing. And you'd definitely be on Disney's side.

The truth is, that thing looks tacky. It would break the immersion by ruining IoA's skyline, and it hamper's Universal's opportunities to expand by filling up the surrounding land with cheap carnival rides.