3 Walt Disney World Attractions that Were Pointlessly Abandoned in 2015

Walt Disney World has an unfortunately long history of abandoning closed attractions in plain sight. From single attractions to entire pavilions and even whole parks (a phenomenon which we'll remind you has happened twice before), it's become increasingly clear over the resort's 40 year history that Walt Disney World doesn't always have a plan in place when it walks away from a project, regardless of size.

Though 2015 has brought a lot of new and exciting announcements to Walt Disney World, it has also brought tons of closures to the resort, and unfortunately, it looks like many of these closures are set to join the Wonders of Life pavilion, Image Works and River Country in that exclusive, but not rare enough “standing but not operating” club.

While some of this year's closures have been deliberate (the recently shuttered Magic of Disney Animation, for instance, is being rapidly transformed into the Star Wars Launch Bay and should be open by the end of the year), there were three attractions in particular that Disney shuttered this year that Disney has no immediate plans to re-purpose. Though plans can change at any time, these three attractions are currently sitting vacant, abandoned in plain sight at Walt Disney World... 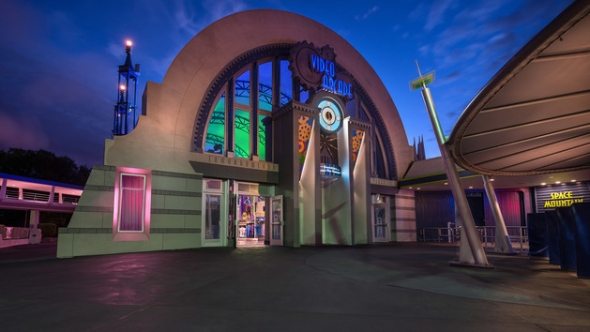 Earlier this year, the Tomorrowland Arcade (which was located next to Space Mountain, and shared an entrance with the attraction’s gift shop) was closed forever, probably due to an interpretation of a new gaming law in Florida that may have negatively impaced arcades. Though no official reason was ever given for this attraction’s closure, after its final day this past February, temporary construction walls were immediately put up around the former arcade space after the actual arcade hardware was removed, prompting many to speculate that something new was coming to this area in the near future

However, what ended up happening at the former site of the Tomorrowland Arcade was much less exciting, and actually a little tragic. Temporary construction walls were quickly replaced by….a permanent wall. Walt Disney World simply walled off a huge part of this building with the empty remnants of the arcade sealed off behind it. You can check out a video below that shows where the connection to the arcade used to be (and the giant wall that stands there now) below:

Obviously, this is a huge waste of space, and is fairly perplexing, as Disney could have just used this area to extend the Space Mountian gift shop, or possibly even house a walk through attraction (similar to the Star Wars Launch Bay) or even an indoor meet and greet for Tomorrowland meet and greet characters like Buzz Lightyear or Stitch. But instead of anything useful, all we got was a wall with an empty room on the other side, abandoned just on the other side of guest view... 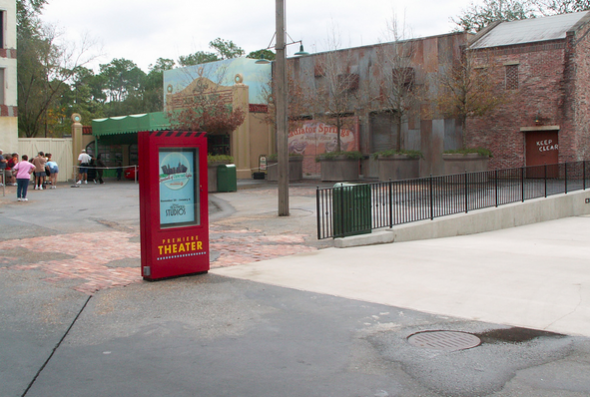 It was almost exciting when the Premiere Theater closed at Disney’s Hollywood Studios this past spring, as many took it to be a sign that work was beginning on either Toy Story Land or Star Wars Land. However, after this year’s D23 announcements, it was revealed that Toy Story Land was being constructed on the other side of the park, and Star Wars Land was so far away, it might as well be in another galaxy (even though we now know that construction will begin sometime next year).

Though this theater has been shuttered for more than six months, it has yet to be demolished, and given Disney’s current timetables, we can’t see this theater doing anything but standing for quite a few more months. Even though work is moving along at a rapid pace on another “flex space” theater down on Sunset Boulevard (which was originally thought to be a replacement for the Premiere Theater, but could turn out to be something completely different), it looks like this building is going to continue to exist, for no real reason, for the foreseeable future.

The last time I saw the Odyssey was during the Fifa World Cup.

I really hope they put some upgraded exhibits soon. I personally really enjoyed the future house that closed recently.

My best guess is that these areas were closed as a result of 'number crunching' The attractions were underutilized and WDW felt the personnel money would be better allocated to a more popular. Tho Innoventions should be re-opened as something since it's right out in the main flow.
When was the last time Odyssey restaurant functioned as a regular eatery? It's been closed for at least 12 years that I know of.

So sad to see what is happening to WDW. The powers that be are ruining the parks. Too many changes, too much construction, too many closures. It's pointless to plan a Disney vacation with all disruption. Looking at other theme parks and skipping Disney altogether. Who knows, we may like other parks better and not return to Disney.