Though we’ve spent a lot of time analyzing the big changes happening at Walt Disney World, several sources are reporting that big changes are on the horizon at nearby Universal Orlando Resort. Though we’ve told you about the Skull Island project at Islands of Adventure (arguably the worst kept secret of all time) and plans to construct a water park near the Cabana Bay Hotel, a number of rumors have surfaced over the past few days that hint that even more changes could be coming to Universal Orlando Resort.

Though no attraction closings have been formally announced, these attractions all seem to be living on borrowed time, some due to age, others due to waning popularity, and a few for reasons that haven't completely come into focus (more on that in a moment). And although we've identified three attractions that are looking like they are not long for this world, we've also identified one additional attraction that has perhaps survived a little too long... 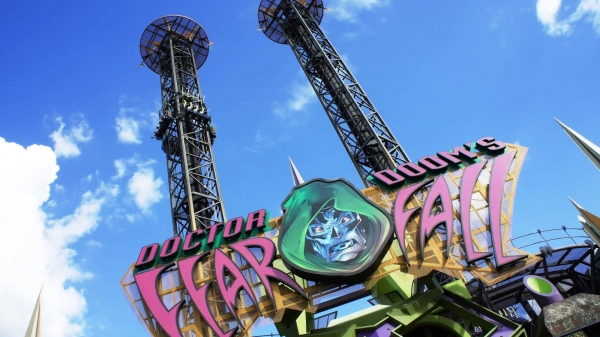 Dr. Doom’s Fearfall is one of the least trafficked corners of Marvel Super Hero Island (succeeded perhaps only by spinning teacup ride Storm Force Accelatron), but it looks like this drop tower may be on its way out in the near future. WDWNT reports that negotiations between Disney and Universal regarding the use of Marvel characters in both parks have been gaining momentum lately, and one of the immediate effects of these discussions may be some changes to Marvel Super Hero Island, including the complete removal of this ride. If negotiations do continue, this loss likely won't be too painful, as the ride never quite resonated with fans and also suffered from poor location (the ride facade is off the main street tucked away at the end of what looks like an alleyway near the Amazing Adventures of Spider-Man show building).

In a linked development, it was reported that the Incredible Hulk roller coaster might be re-themed as part of the negotiations with Disney as well, but the roller coaster structure (and launch element) would remain the same if this rumored refurbishment did occur. 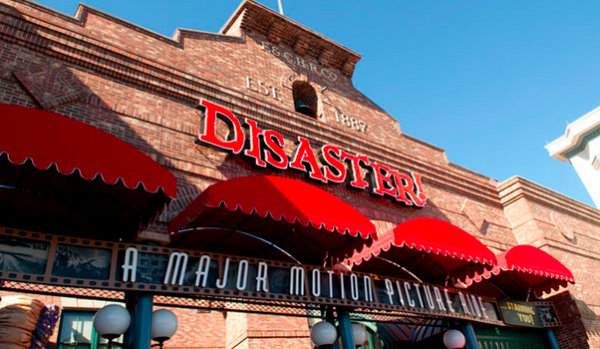 It seems like rumors about this attraction’s imminent demise seem to come along like clockwork every year, and 2015 looks to be no different, with several sources saying that this could be the year that finally sees Disaster dispatch its last tram. Though we wouldn’t expect any movement on this attraction in the short term, after the summer season comes and goes, we wouldn’t be surprised to see this attraction finally close for good, especially as rumors are beginning to swirl that Universal Orlando Resort may want its own Fast and Furious attraction, similar to what Universal Studios Hollywood has.

Of course, rumblings about a Ministry of Magic attraction have also made the rounds in the past, and Universal may elect to go back to the Harry Potter well for a third time if they are looking to capitalize on the runaway success of nearby Diagon Alley.

Well at this point, twister and disaster have both been closed. I was just there in October and disaster was down and last month twister had its last showing. As much as I hate to see them go I guess they have to make room for new rides. However, in my honest opinion a few attractions that I personally believe need to go over anything else is shrek on the universal side , and on the ioa side sinbad and poseidons adventure. All three just a big waste of space in my opinion and definitely could be replaced with something more worthwhile.

Gotta disagree about Terminator. When I went in January I was blown away with how good the show still is. Better than I'd seen it in the past. The lighting was spot on, obscuring the live actors faces perfectly. Much better than the previous time I saw the show, just before it closed at Universal Hollywood. I first saw the show in 1998, and have always enjoyed it, but everything was just perfect this most recent time. We had a first timer in our party and they were as blown away with T23D as they were with all the Harry Potter stuff.

T2 is pretty much amazing. Almost everything in the attraction holds up today, and I still find it enjoyable after many visits. The host is usually really funny and the water, fog, and 3D all work pretty well.

Disaster is pretty enjoyable and funny even if it's expensive/low ridership/slated to head home. Twister is a poor attraction with weak effects, though Bill Paxton is the biggest tool and always makes me laugh. E.T. needs to never go, it's one of the only rides that is fully-animatronics and it's the only E.T left. It is unique and is so trippy and awesomely bad.

What REALLY needs to go is Shrek. It's far and away the worst attraction at the resort, the story makes no sense and the effects are awful. Sindbad is a very very close second for having such tired jokes and annoying characters, it's the worst theme park show in the whole state. Fear Factor is fun once or twice, but something better would be welcome there.

I'm all for Doctor Doom and Twister leaving, hell I heard twister is being replaced by a possible return to Ghostbusters with the upcoming new films. But Disaster I'd prefer not to leave. Not only one of the last of the classics (Earthquake as it was once called) but it gives kids very much an educational look on how films are made, which the studio really lacks. ET will probably stay due to Spielberg owning the building. From sorces at the park, which I have talked to, Spielberg has privately stated that if ET goes, all of his licensed themed rides will go as well. This includes Jurassic Park, Transformers and Fivials Playland.

Great article, I enjoyed reading your views and opinions very much.

In regards to Dr Doom's Fearfall, it might be useful to know that a possible removal wouldn't be too directly involved with Disney as it would with Marvel itself, and their current issues with FOX. The movie rights for The Fantastic Four, as well as The X-Men, are currently held by FOX, however it is believed by many that Marvel/Disney want the rights back to handle the characters themselves. As such, Marvel? Disney, who own the F4's comic book, television and merchandising rights, have axed all current F4 comics, as well as not produced merchandise or television programs for either the F4 or the x-men brands, and as rumour has it, are currently hoping that Josh Trank's F4 movie doesn't do too well at the box office so that FOX will cut their losses and revert the F4 rights back to Marvel. Additionally, looking around Marvel's Superhero Island, almost all traces of F4 are gone, the only merchandise is a F4 logo Tshirt and old comicbook collections, and their Fantasticar photo op spot has been missing for the last few years, so it is possible that this is a request from Marvel themselves, to if not remove the ride, at the very least re-theme it so to reduce the F4's exposure. If this is true, it's possible that the Human Torch Pizza place may also be rethemed. Of course I am just speculating but I thought I'd give my theories based on what I know.

I just don't think that if Disney were to be having discussions with Universal regarding Marvel, i can't see F4 being too much of an issue, as it is more likely that they'd be wanting to make use of The Avenger's characters in WDW. For this reason I could see the retheming of the Hulk, and removing the Captain America meet and greet, but other than that, Universal aren't really using too many of the character's Disney would want. Obviously Disney would also be interested in Spider-Man, but considering how popular the Amazing Adventures of Spider-Man ride still is, especially after being digitally remastered a few years ago, I can't see Universal rolling over on that property too easily. I really hope they wouldn't as well since I still regard it as the best Theme Park ride ever made(sorry Harry Potter).

In regards to the Terminator 2 £_D attraction, I'm not entirely sure why you consider it to be so outdated, I know it's an old attraction, but when I last went last Summer, i thought it held up well. The graphics are still good, at a push maybe they could be digitally remastered but I personally don't think it's necessary, and the story is quite strong i think. I always felt like I was stepping into the word by touring Cyberdyne industries, and I absolutely love the way the live actors and set pieces blend with the screens, similar to the Spider-Man and Harry Potter rides, just as a show. When I went I noticed that there wasn't much a queue like there had been on previous visits, however once entering the pre-show wait room it seemed to fill up quite fast. Besides if they were to replace it, it would most likely have to be with a similar style show as a ride takes up more space than a theatre and I really do't think theres too much space available in that area with all of the shops. If they were to replace it with a similar type show, it'd be interesting to see property they would use, as I can't really think of one working as effectively as this show as it really is one of a kind, however I am sure that Universal being the geniuses they are could come up with something, perhaps something to do with monsters to go with the Horror Make Up Show next door. I don't know, but I just think it's still quite a spectacle to watch, and besides, who doesn't love that cheesy tour guide who clearly has a secret dark side.