Disney California Adventure closed the former Condor Flats area several weeks ago, and now we know a little bit more about the new Grizzly Peak Airfield expansion that will be replacing this former land, including what it will look like, what new elements are coming to the area, and most importantly...when it will open! 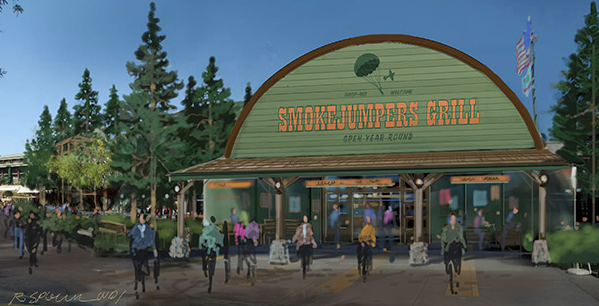 Because of the new extended Grizzly Peak theming, the bright and colorful Taste Pilots Grill has undergone some serious refurbishment and is in the process of transforming into the Smokejumpers Grill. With this refurbishment will come a new outdoor façade meant to recall the world of California forest firefighters.

The menu will be only slightly different than what was offered prior to the closing of the Taste Pilots Grill, serving mostly sandwiches and burgers. Confirmed menu items include a bacon cheeseburger, chili cheeseburger and a jerk chicken sandwich.

2. A new tower landmark is being built and new forested areas are being constructed 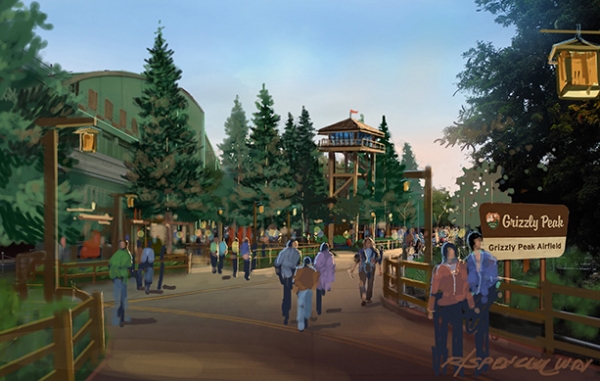 Though there are plenty of visually striking landmarks at Disney California Adventure, it looks like the expansion of Grizzly Peak will add one more to the bunch, as recently-released concept art shows a brand new control tower being erected in front of Soarin' Over California, which should serve as a natural-feeling landmark (and look a LOT better than the sparse hangar that was previously the center of the Condor Flats area).

In addition to the new landmark, the area will be getting a lush, forested makeover that will see the incorporation of plenty of trees and woodsy areas that will provide some refreshing shade in the summer months. The whole area looks like a state park, and works well as an extention of the existing Grizzly Peak area.

The old Condor Flats displayed the historical aspects of California aviation as part of a California Adventure. Whereas the new theming is nice, as Walt's Adventure instead of Grizzly Peak, it should have been renamed as Mineral King and County Bear Jamboree be brought back.

The old Condor Flats displayed the historical aspects of California aviation as part of a California Adventure. Whereas the new theming is nice, as Walt's Adventure instead of Grizzly Peak, it should have been renamed as Mineral King and County Bear Jamboree be brought back.

You say it would look alot better than the sparse hangar that was previously there. I have to disagree with this, the hangar actually fit it's theme very well previously. It was based off a hangar in Edwards, where there is actually pretty much nothing around it but good old dirt and Joshua trees. On the contrary, I think the old Condor Flats had a great piece of History integrated into it, and told a story of California Adventure, Not Walt's Adventure.

That tower has always been there. It held the jet engine water play area. Just being rethemed.