Though we told you back in July that Maelstrom was on its way out, Disney made its demise official late Friday. Though Disney typically announces big projects and new attractions on weekdays and with plenty of fanfare, the Frozen ride that will replace it was announced with a simple blog post that invoked Walt Disney’s famous phrase about Disneyland never being complete and went on to give vague details about plans for the ride.

Needless to say, fan reaction has varied from ecstatic to negative, with many wondering what this move might mean for the future of World Showcase, as well as Epcot at large. Here are three ways that the addition of this new attraction could change Epcot forever.

1. Epcot will fill up faster and crowds will be more intense

Epcot has enjoyed a relatively even distribution of guests in recent years, never reaching the insane guest density that is common in the Magic Kingdom. Though rope dropping the park has been a challenge recently thanks to changes in FastPass+ policies for Soarin’, by and large Epcot feels like a less populated park (partly due to its massive walkways), which has made annual events like the Food and Wine Festival and Flower and Garden Festival a breeze to stroll through.

However, it seems like anytime you add Frozen to anything, people show up in droves. Though there has been some serious backlash regarding the new ride online, come early 2016, guests of all ages will show up, likely in record numbers for Epcot. Could ballooning attendance numbers change the current “feel” of Epcot? And more importantly, with the park getting more packed, could we see a restructuring of these long-running events to help manage crowds running towards this new attraction? 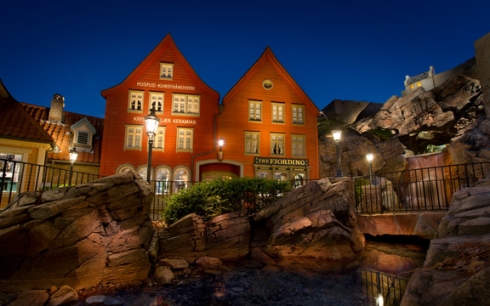 This situation was far from ideal, and even though crowds swelled for the Frozen meet and greet, its safe to assume they’ll reach gargantuan levels for the Frozen ride, which could make rope-dropping Epcot a two tiered affair as guests sprint through Future World at park open and then wait to be let into World Showcase.

However, this nightmare scenario could be prevented if Epcot opts to do away with the later opening time for the World Showcase and instead open it alongside Future World, so that eager Frozen fans can get to Norway as soon as the Epcot opens and no impromptu queues smack dab in the middle of the park.

EPCOT was designed as and should always remain a permanent World's Fair. It's a park designed for learning about the world and exploring the future not riding through fictional lands on a boat. The characters themselves in World Showcase aren't really that bad but they're transforming an entire pavilion, shifting its focus from Norwegian folklore to Olaf and friends which is a huge mistake. Tokyo Disneyland has planned their own Frozen expansion and its going where it belongs, in Fantasyland.

I just got back from WDW and have been there multiple times. World Showcase, to me, was something like a permanent World's Fair. It was about culture and education. Even the food and the national servers was educational, but fun. Frozen is not educational...it is an expansion of the Magic Kingdom into Epcot. Like the Fast Pass Plus, this change is all about Disney increasing revenue. Each of the four parks should have their own identity, and the proposed change will break this down. Future World has also been dumbed down...Nemo in Living Seas, Ellen in Energy. Very sad.

I totally agree! I have been visiting the Disney Parks in California a Florida for over 30 years now and Epcot was always one of my favorites because it was a change from the other parks. I also loved the relaxed and educational aspect. It is a very sad situation and perhaps if enough people complain about the change it will continue to be "EPCOT" not "Epcot Amusement Park."

I feel as if some of Future World changes are ok, as long as the educational integrity isn't compromised which in Ellens Energy Adventure thats really not the case. However almost ALL of Future World desperately needs an update The Imagination, Energy, and Seas pavilions have really not aged well and could use some attention. Honestly I think Disney should spend their time ensuring Future World continues to live up to its name rather than modifying World Showcase.

When I heard about the change I couldn't believe it. Epcot has been my second favorite park next to the Magic Kingdom. I think Walt Disney would turn over in his grave if he saw the dismantling of the Cultural World of Disney. I have been going to Disney Parks since the early 70's and so enjoyed the special atmosphere and experience of Epcot as a complement to the fantasy world. Destroying the current cultural atmosphere of Epcot is a huge, huge mistake. I can definitely agree with some updating but not destroying Epcot. What are they going to do next turn the globe into a symbol of PIXAR!