Late last week, SeaWorld unveiled its ambitious new Blue World project. This new initiative will see the tank space for SeaWorld’s killer whales effectively doubled by increasing both the depth and the width of the existing tank. The new tanks will also feature “fast-moving current” to help simulate ocean enironments.

In addition to the new features for the marine mammals, the Blue World project will also include additional viewing areas for guests too, including a more natural beach-like setting and underwater viewing areas situated at various depths, to give visitors multiple perspectives.

Though this new plan certainly sounds ambitious, it raises several questions both about the project itself as well as about the future of SeaWorld, especially in the face of flagging attendance and plummeting stock prices.

1. When will the project be completed?

SeaWorld has announced that construction on the Blue World habitat will begin in San Diego next year. However, we don’t know when next year ground will be broken on the tank expansion. The current completion window is roughly estimated at sometime in 2018 (putting the project more than three years out from now), but even this generous launch window could yet be pushed back further as plans are finalized. And that’s just San Diego. Orlando has no start or completion date yet for its own version of Blue World, which is equally toubling. 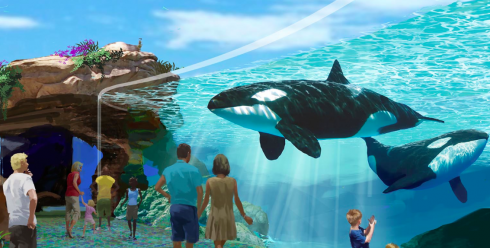 Though SeaWorld announced plenty of details about the features of this new whale habitat (current specs show a 50 feet deep tank with 1.5 acres of surface area), we know absolutely nothing about how much this new project will cost. While that might not be a big deal to casual tourists, SeaWorld currently has a revenue problem, and investors might not warm up to a big expensive project with no budget that doesn’t technically have an end date.