The news of Robin Williams untimely passing hit many in the Disney community very hard. Not only was he the iconic voice of the Genie in Aladdin and a Disney Legend, but he was also a fixture at Disney Parks.

Though both attractions that featured Robin Williams have since been retired, those that have visited Disney Parks in the past may have fond memories of visiting these two attractions over the years. However, there are still two places at Walt Disney World where you can still see references to Robin Williams. 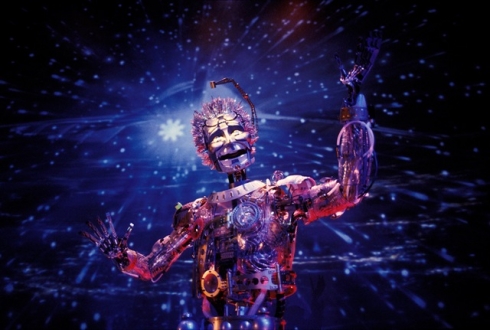 This attraction was first opened in 1992 at Disneyland Paris and went on to be duplicated at Tokyo Disneyland in 1993 and finally hit Walt Disney World in 1994. For those who never got the chance to experience The Timekeeper, the attraction was primarily a circle-vision show, but its titular character, the Timekeeper was an animatronic character that appeared at the front of the theater.

Though different voice casts were used at Disneyland Paris and Tokyo Disneyland, the voice of Timekeeper was performed by Robin Williams in the US version, and the animatronic even featured some of his mannerisms.

The 10-minute film saw the Timekeeper guiding visitors through the past and the future along with his assistant, 9-eyes (named for the amount of cameras needed to create the circle-vision film), and provided plenty of laugh out loud moments.

Robin Williams’ performance as the voice of the Timekeeper was certainly a defining feature of the attraction, and one of the big reasons why this attraction was a fan favorite during its decade-plus of operation. Though the attraction closed in 2006, Timekeeper is still remembered fondly to this day. Check out the video below to take a trip down memory lane and revisit this classic attraction.

Classic Attraction: Back to Neverland 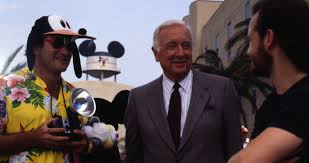 Although Back to Neverland is a part of the Magic of Disney Animation (which still exists) this particular film was phased out in 2004 and replaced with a Mulan-themed show. Before it was removed, the Back to Neverland film was a ten minute introduction to the world of animation which featured Walter Cronkite and Robin Williams. Robin played a tourist who, through the magic of animation, gets transported to Neverland as a lost boy.

In light of the recent tragedy, some fans are hoping that Disney will temporarily bring this film back, either at the Magic of Animation at Hollywood Studios or even at the Imagination Pavilion at Epcot, perhaps where Captain EO is currently being shown. Though it’s certainly a long-shot, perhaps we could see a “limited engagement” re-release of Back to Neverland to help fans remember this Disney Legend. 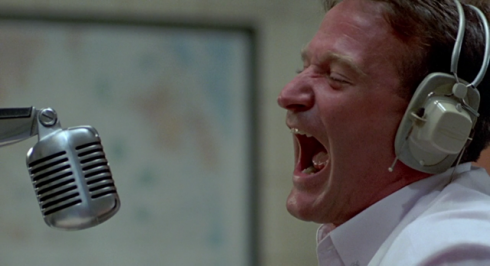 Though Robin Williams’ two starring attractions have been replaced, you can still find him in two places in Walt Disney World. One is in the queue for Journey into Imagination at Epcot, where a large poster featuring his character from the movie Flubber hangs.

The other area is in the Great Movie Ride at Disney’s Hollywood Studios. During the ride’s final film montage sequence the iconic clip from Good Morning Vietnam is played, complete with audio. Though the clip is small, it is the biggest tribute to the late actor that currently exists at Walt Disney World.

The passing of Robin Williams was a huge blow to the entertainment industry, and many of us who have fond memories hearing his voice at the parks took the loss especially hard. However, his legacy still lives on in the parks in small ways. How do you remember Robin Williams? What are your favorite movie or theme park moments?

Enjoyed both of Williams's "starring roles," especially, Back to Neverland. It is not unusual for Disney to use the voice talents of stars who have passed. Walter Kronkite provides the voice narration to the Christmas add-on to Illuminations. It would be a treat to see Back to Neverland again.