MyMagic+ has enjoyed a fairly smooth rollout over the course of 2014.Though there was a small outage at the beginning of the summer, the system has enjoyed a mostly-hiccup free inaugural year. Unfortunately, that ended on Saturday August 2, when MyMagic+ experienced its first real outage.

During the almost day-long outage, guests were unable to make FastPass+ reservations, use their existing reservations, or claim dining reservations through the app. Naturally, there was plenty of confusion around the parks, as guests tried to keep to their vacation plans.

Hopefully this type of large-scale outage doesn’t happen again, but if it does, here are four things to do if the worst should happen: 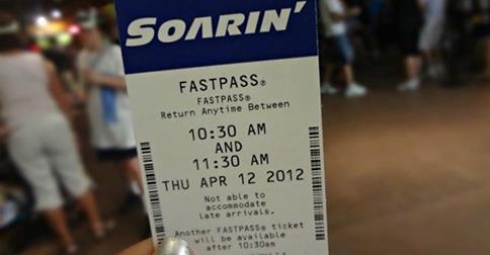 It looks like Disney was well-equipped to deal with the MyMagic+ outage on Saturday, as they had paper FastPass machines ready to go at several distribution centers around the parks. Cast Members handed out special pamphlets listing the different distribution centers and what attractions were still available for FastPass.

Not all attractions will be available for paper FastPass, as this is just a contingency plan, but at least you can try to get replacement FastPasses for a few of the attractions on your itinerary.

When the MyMagic+ system went down last Saturday, pre-existing dining reservations that were made via MyMagic+ were lost. Although Cast Members are more than happy to help guests recover a lost reservation, you’ll have to contact the restauruant either by phone or in person to confirm your reservation time.

I cant wait till all attractions are required Fast Pass admissions. an outage would cause the chaos this system deserves.

I took screen shots of all of our fast passes & dining reservations that were in the app just in case it went down. It was a good thing too because the app did have issues twice while we were there last fall. Cast members appreciated it & honored them. The magic bands were great too.

Also always print a paper copy of all your fastpasses

We were there and although you could not check on the app, each attraction were able to check the next fastpass on your band. This ensured you at least knew where you should be next. Upon completing the ride then you could check your next one. The staff coped well and we didnt see any issues with guests or staff. As usual Disney coped well with the glitch and it was back up by late afternoon.

Technology has spoiled us in so many ways!! This is such a well written article. I feel Disney is THE leader in family entertainment and is amazing to have quick contingency plans and well-trained cast members .