Verrückt, the world’s tallest water slide, might be getting closer to an official launch.

This infamous slide, located at the Schlitterbahn park in Kansas City, Kansas, has now been tested successfully by a human (the ride engineer) according to a new video posted on YouTube. Once open, this slide will be the tallest in world, reaching a height just over 168 feet (roughly 17 stories) tall.

From its inception, the Verrückt (which, if you were wondering, is German for insane) has been marred with issues. Early test footage showed testing sandbags being launched from the peak of one of the ride’s two hills, and earlier this year, the Travel Channel captured video of a passenger raft flying wildly into the air from atop the same hill. However, with an actual tester completing the ride sucessfully, it looks like these issues may be finally worked out.

Riders who are brave enough to give this slide a try will travel the equivalent of two football fields in 18 seconds and will reach speeds of 65 mph. The ride also includes a 60-degree, 17-story near free-fall that leads into a 55-foot-tall hill where riders will experience the sensation of going from 5 Gs to weightlessness before their final splash down. 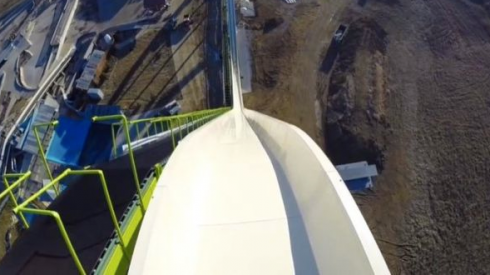 The View from Verruckt

As you might expect, there are some big safety measures in place on the Verrückt, including a large net surrounding the slide and velcro seat belts on the passenger rafts.

Will this attraction make its 2014 launch date? It’s hard to say, especially as the summer season winds down next month. However, if it does see a release date, it looks like only the brave need apply!