Universal Orlando recently revealed several new entertainment offerings for the soon-to-open Wizarding World of Harry Potter - Diagon Alley, and the offerings look to be quite interesting.

In the mix are two new roadside shows that will be performed daily in the Carkitt Market district, a new currency exchange system (keep reading, it’s cooler than it sounds!) and confirmation of details on the Knight Bus attraction. 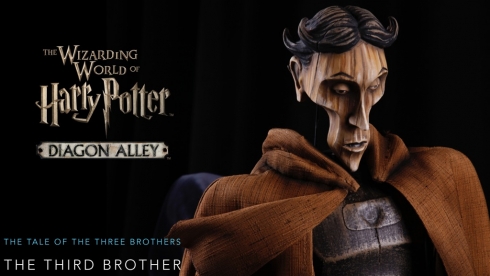 Two roadside shows will alternate at Carkitt Market, the first of which will feature puppets recounting tales from the The Tales of Beedle the Bard story collection.  The first story will be The Fountain of Fair Fortune, which was never mentioned in the films, but features three women and a muggle who wish to change their fate with the water from an enchanted fountain. The second story featured in this show will be a little more familiar: The Tale of the Three Brothers. This story, famously retold through an amazing animated sequence in Harry Potter and the Deathly Hallows: Part 1. Universal has released some publicity photos featuring the puppets that will be used in this second sequence, and to say that they nailed the visual style from the movies is an understatement.

The second show to be featured at Carkitt Market will be a musical performance show: The Singing Sorceress: Celestina Warbeck and the Banshees. You may recall that we mused about the possibility of Celestina Warbeck showing up at Diagon Alley just a few days ago, but it’s always nice to see some official confirmation. This performance show will feature songs including A Cauldron Full Of Hot, Strong Love, You Stole My Cauldron But You Can’t Have My Heart and You Charmed The Heart Right Out Of Me. 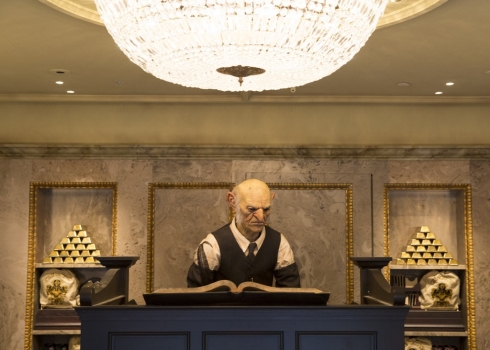 Though in-park currency is a fad that has faded in recent years (when was the last time you saw someone with a Disney Dollar?) Universal Orlando looks to be bringing this trend back with an entire area devoted to exchanging “Muggle Money” for “Wizarding Bank Notes”, which can be used to purchase snacks and souvenirs all over Universal Studios and Islands of Adventure (not just in the Harry Potter areas).

The exchange will take place at the Gringott’s Money Exchange, which is an expertly-themed area complete with props and an animatronic goblin! No images have been released yet of what these Wizarding Bank Notes might look like, but you can be sure that the souvenir value of this in-park currency will be high. 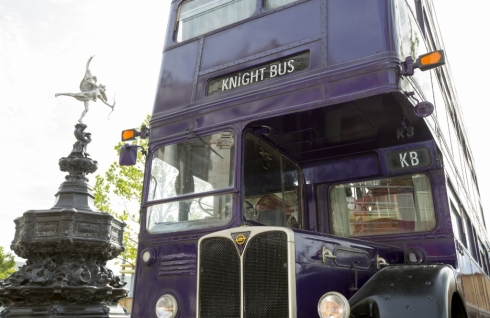 Though most of us guessed that the Knight Bus parked outside Eros Fountain would feature some kind of animatronic entertainment, Universal has confirmed that the Caribbean-accented shrunken head as well as the Knight Bus Conductor featured in Harry Potter and the Prisoner of Azkaban will indeed be park of the Knight Bus attraction.

These characters will be able to chat, joke around and take photos with guests, and are likely to be controlled by a remote operator.

Though we still don’t have an opening date for Diagon Alley, rumors are swirling that it could be opening as soon as later this month. With all the new information we’ve been receiving over the past few days, I wouldn’t doubt it!