With Diagon Alley rumored to be only weeks from opening, a few small details have been emerging surrounding the second Wizarding World of Harry Potter.

You might have read all about the new track system being used for Harry Potter and the Escape from Gringotts or heard about the dragon installation that took place a few days ago, but here are some new details about the Wizarding World of Harry Potter - Diagon Alley that you probably haven’t seen yet!

1. The Wizarding Wireless Network will be around (in some form)

Though the Wizarding Wireless Network sounds like a fancy name for Wi-Fi, book fans will recall that this is actually the name of a radio network in Hogsmeade. Several days ago Universal released a teaser video promoting the upcoming opening of The Wizarding Word of Harry Potter - Diagon Alley and while President of Universal Creative, Mark Woodbury is talking about the new area, there’s a blink-and-you’ll-miss-it shot of blueprints that include a structure that bears this radio network’s name in the Diagon Alley area.

Will guests be treated to the sound of Celestina Warbeck or hear a news bulletin or two? Could this be an interactive feature? There’s no way to know what form the Wizarding Wireless Network will take for sure, but there’s no mention of it at all on Universal’s official website or blog, so feel free to speculate away!

Thought having a Butterbeer was the ultimate Harry Potter-themed drink experience? Think again! Diagon Alley will feature a new interactive drink cart that will allow users to select from a variety of elixirs (Draught of Peace, Babbling Beverage, Elixir to Induce Euphoria and Fire Protection Potion have all been confirmed), and then add the elixir to a plain Gillywater beverage. Guests will then see their drinks instantly “transform” before they can sample the unique flavor of their customized beverage. This cart, named Eternelle’s Elixir of Refreshment will be in the Horizont area of Diagon Alley, and sounds like a can’t-miss attraction.

3. Butterbeer Ice Cream will be available in Diagon Alley 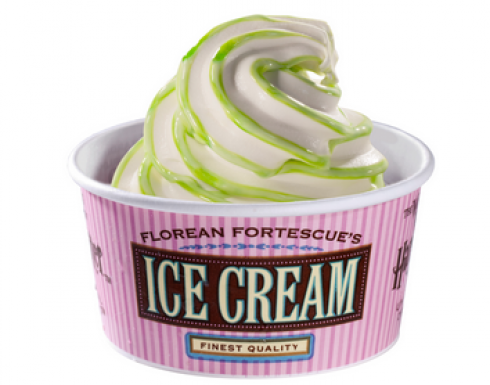 You’ve had plain Butterbeer. You’ve had frozen Butterbeer. And now the logical conclusion to what appears to be a Butterbeer tri-fecta has appeared: Butterbeer ice cream. This sweet treat will be available exclusively at Florean Fortescue's Ice-Cream Parlour in Diagon Alley, along with other flavors like Earl Grey and lavender, clotted cream and granny smith (pictured above).