Report: "World's tallest" Polercoaster's location in Florida to be revealed "in the next 2-4 weeks"

The location of the world's tallest roller coaster, dubbed the Polercoaster, will be revealed within the next 2-4 weeks, according to local news reports from Florida.

At last year's IAAPA conference, S&S Power and US Thrill Rides revealed plans to build the extraordinary ride somewhere in Florida, with the two firms claiming that a location would be revealed within weeks ahead of a 2016 opening date. No such announcement has been forthcoming, but WESH now reports that the shroud of mystery surrounding Polercoaster will be lifted within 2-4 weeks.

The report also mentions that the height of the coaster, initially pegged at 520 feet, has been increased to a staggering 570 feet. This would shatter the current roller coaster height record of 456 feet, held by Kingda Ka at Six Flags Great Adventure. The concept's inventors claim that Polercoasters could range from between 200 feet to some 1000 feet in height - meaning that the Florida version is barely half as tall as the theoretical maximum. 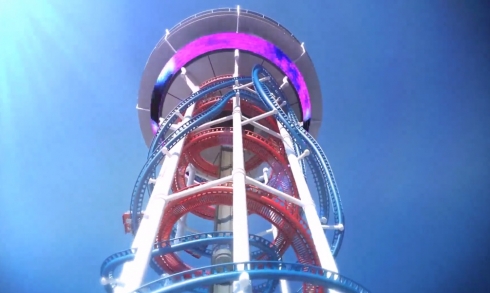 The WESH report claims that "theme park insiders" have suggested that the Polercoaster would not be viable as a standalone attraction, and will therefore be placed inside an existing major theme park. However, this appears to be merely conjecture at this stage.

Excited about the prospect of this record-breaking coaster? Check out our recent article covering 5 intriguing facts about the Polercoaster.

Where ever this is going it will have to make sure it passes a lot of zoning issues.