Universal Orlando has announced more details of The Wizarding World of Harry Potter - Diagon Alley. Join us on a virtual walk through the new land!

Diagon Alley will recreate the magical street seen in the Harry Potter books and movies. But there's actually much more to the new Wizarding World than that, including three other areas, two rides, two restaurants and a host of retail outlets. We've done our best to give an impression of what each area will look like below, using Universal's concept art and shots of sets from the movies themselves.

The new land has replaced Amity, the former site of the Jaws ride. This means that it faces onto Universal Studios Florida's main lagoon. Of course, in the movies, Diagon Alley does not face onto a lake. So the front of the second Wizarding World will be a recreation of several London landmarks. Universal has dubbed the area the London Embankment, but actually it will be a mish-mash of different icons from the city. 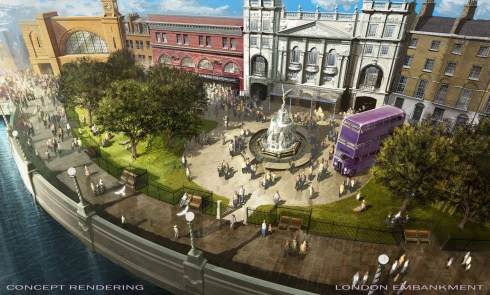 As you walk around the lagoon from the San Francisco area of the park, the first facade you'll come across is that of Kings Cross Station, which will act as a terminal for one of the land's two new rides: the Hogwarts Express. We'll return later to hop on board. 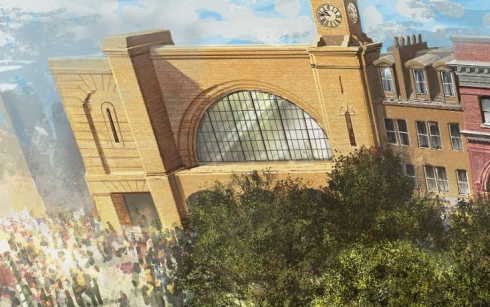 Next to the station is a frontage designed to represent Charing Cross Road. This includes the entrance to our next stop.

In the books and movies, The Leaky Cauldron pub forms the entrance to Diagon Alley. Muggles see just an old, rickety shop front on Charing Cross Road, but wizards are able to pass through a hidden doorway and enter the mysterious alley. At Universal Studios Florida, The Leaky Cauldron will become the main dining outlet, performing the same function as the Three Broomsticks in the original Wizarding World. Expect Butterbeer aplenty, along with traditional English dishes. No word yet on the menu, although it is expected to include fish and chips and bangers and mash.

Let's emerge back onto the Embankment. Next to Charing Cross Road is Grummauld Place, the home of the Black family, and (non-functional) replicas of the Leicester Square tube station and Wyndham's Theatre. 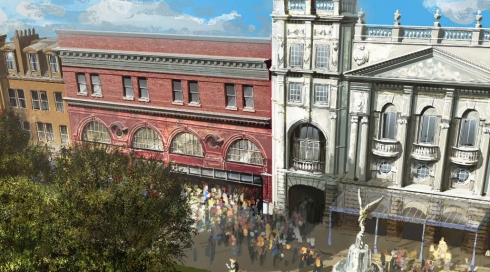 The central plaza area is dominated by the Eros Fountain from Piccadilly Circus, sure to be a popular photo opportunity. 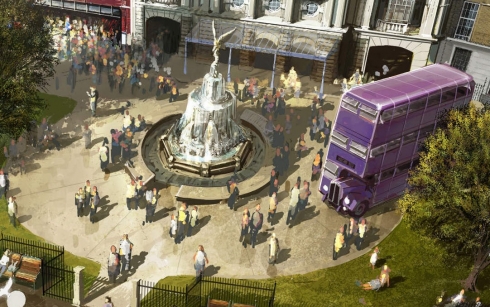 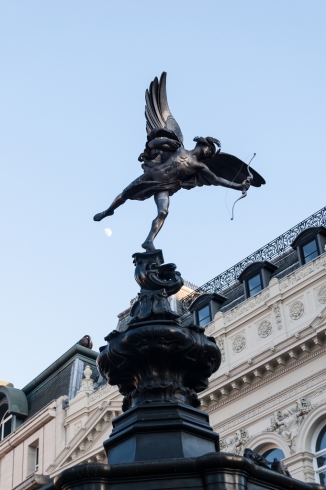 Next to the fountain is the Knight Bus. For wizards who are running late or lost, this is a godsend. The triple-decker, purple AEC Regent III RT races around at a lightning-fast pace and featured prominently in Harry Potter and the Prisoner of Azkaban. 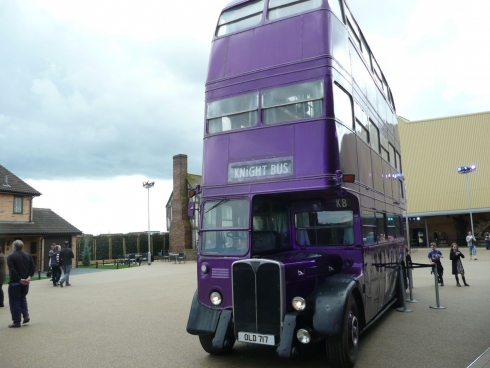 The interior of the bus will feature an interactive talking "zombie" head. Universal recently issued a casting call for this role, inviting people to: "Prepare a one-minute monologue in a Caribbean accent." 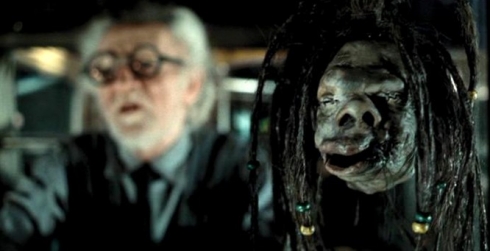 One last stop before we head into Diagon Alley. What's this tucked away in front of Charing Cross Road? It's a traditional British Telecom phone booth. Something that warms my heart, as I worked for BT for 9 years! 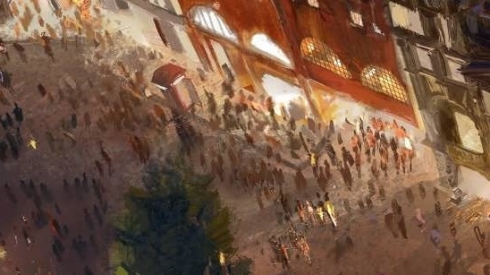 The phone booth is a perfect photo spot - and also a place for Universal to hide an "easter egg" or two triggered by a "phone" inside.

Ready? Let's pass under the cut-out archway in the London facades to enter Diagon Alley itself. 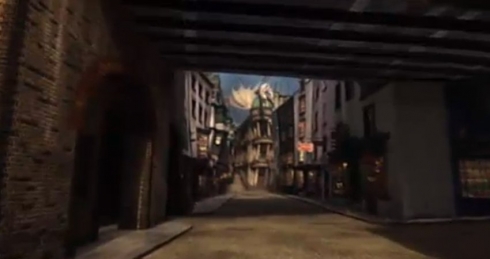 Here we are! Gringotts Wizarding Bank, topped by a fire-breathing animatronic dragon, is at the far end of the alley. Between us and the ride that the bank hosts is, effectively, one long shopping street. Universal is going to make a fortune from merchandise sales. 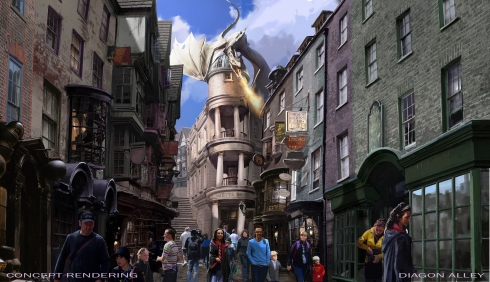 The above shot is concept art from Universal. Here's a shot of the actual set (as seen as the Warner Bros. Studio Tour in London): 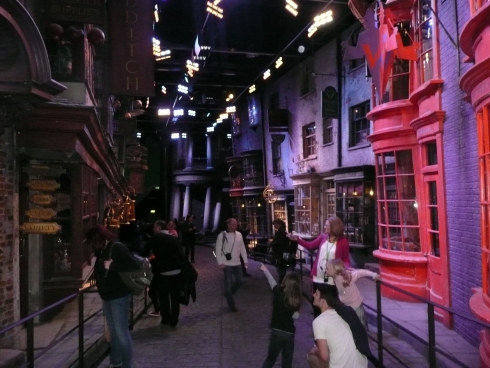 To our left as we enter is the Leaky Cauldron, which we've already dined at. So let's look over to the right, where we'll find the first store. 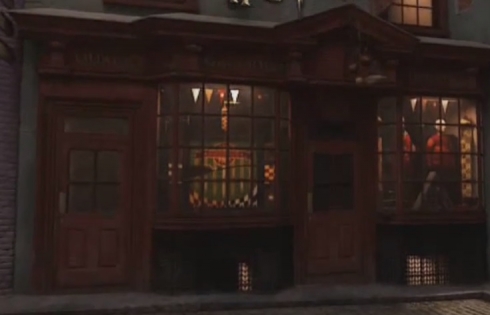 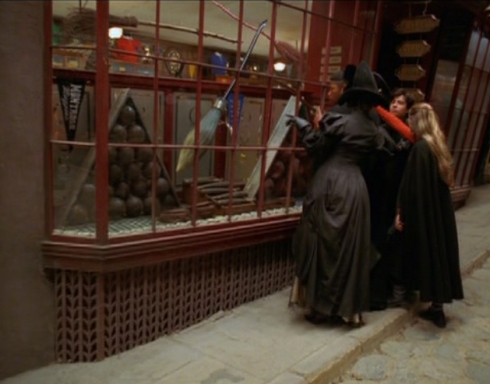 Quality Quidditch Supplies will offer a host of supplies for the sport, such as broomsticks, snitches, bludgers and bludger bats and quaffle balls.

Next to Quality Quidditch Supplies is the instantly-recognisable Weasley's Wizard Wheezes. It will sell all manner of tricks, and will feature the distinctive storefront seen in the movies. 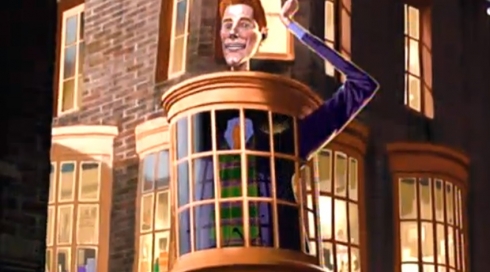 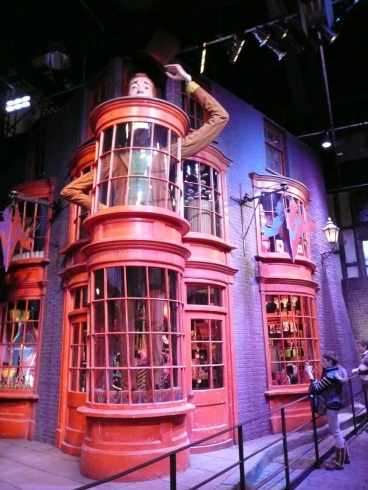 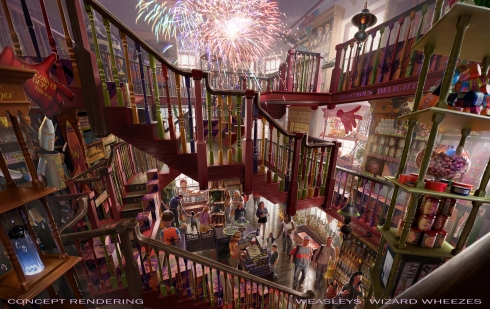 Let's take a quick detour through the archway on the left, opposite Weasley's Wizard Weases. We're now in the murky Knockturn Alley - a favorite hangout of dark wizards. The area will be covered to ensure that the Florida sun doesn't brighten up the atmosphere. 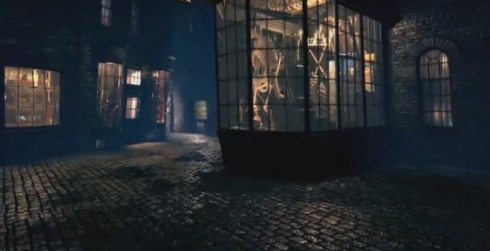 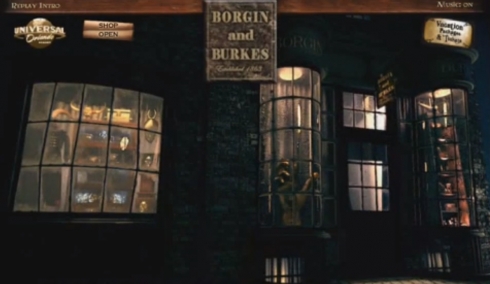 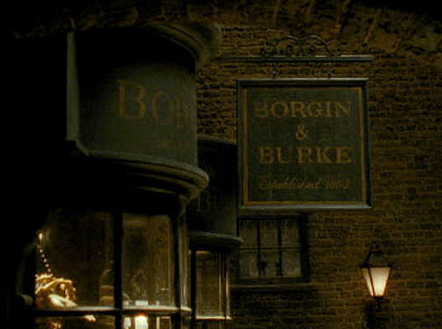 The headline store of the murky Knockturn Alley will be Borgin and Burkes, which will offer all manner of dark magic objects and other dangerous items such as human bones and leering masks.

Let's emerge back into Diagon Alley. The next stop on the right is Ollivanders Wand Shop.

Yes, there's already an Ollivanders Wand Shop in the existing Wizarding World of Harry Potter. Its chronic lack of capacity, though, means that a larger version will be installed in Diagon Alley (the real home of the store in the books and movies). 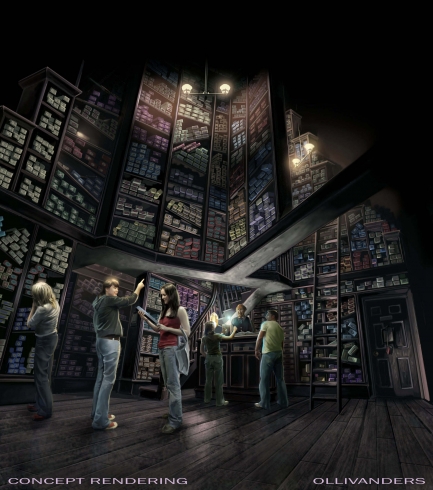