The nature of the attraction is not yet known, with Merlin promising that it will be the first of its kind in the world. It will be situated between two other Merlin attractions - The London Dungeon and the Sea Life London Aquarium. The company has submitted its application to Lambeth council. If approved, it hopes to begin construction in September 2014, in time for an opening date in April 2015.

The new attraction will be housed largely on the first floor of County Hall, replacing the former London Film Museum South Bank. The remaining movie museum exhibits will be relocated, enabling Merlin to install ten main show rooms, each lasting around six minutes. 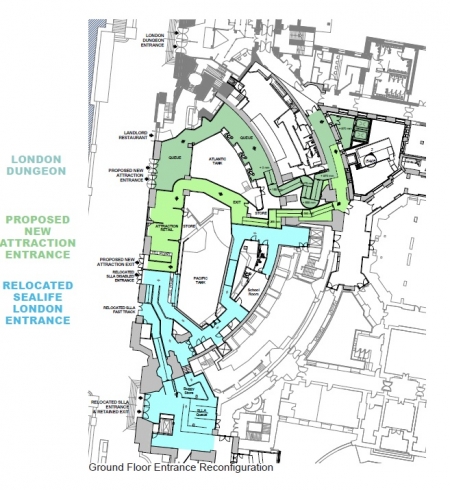 The entrance will be located on Thames riverfront (click to enlarge). 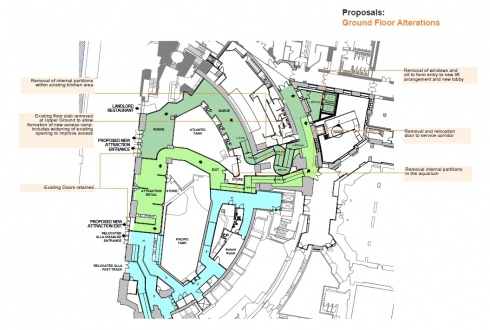 A large shop will be located on the ground floor (click to enlarge).

Two key elements of the attraction are revealed in the application:

Merlin promises that the attraction will consist of "high-tech show experiences within the historic fabric" of County Hall. "Where theming is used it is a combination of physical and digital projection and audio-visual which is used to create an immersive experience," according to the firm. Just as with the London Dungeon, guests will be batched into groups before being sent around the attraction's "themed circulation corridors". 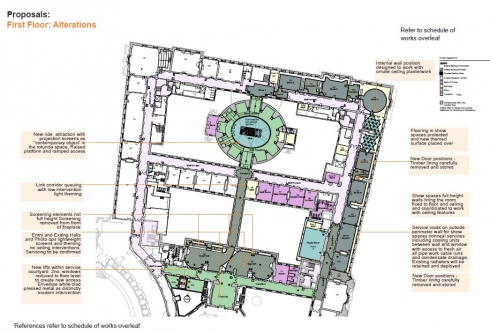 The overall layout of the attraction with the bus ride at its heart. (click to enlarge). 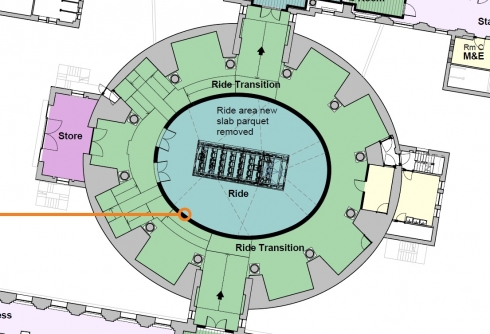 A close-up of the bus ride setup. (click to enlarge).

Drawings of the bus ride show a large motion simulator. Merlin has stated that the ride will be "interactive", which suggests that riders may be equipped with weapons of some kind.

Merlin is focusing its London attractions, which also include the London Eye, around the County Hall site. Last year, it relocated the London Dungeons to the site in a £20 million project.