Thorpe Park will open a new version of The Crash Pad on-site hotel in 2014, rebranding the accommodation as the Waterfront Hotel.

The Crash Pad was installed by specialist firm Snoozebox for the 2013 season, and currently boasts a total of 58 rooms, each sleeping up to 4 guests. Each bedroom is housed inside a recycled ISO shopping container, and features an en-suite wet room.

Snoozebox will not be involved with the Waterfront Hotel, with Thorpe Park replacing the firm's shopping containers with its own, custom-designed versions. It hopes to add 50 new rooms to the site immediately, and to eventually bring the total up to 184. In keeping with the new name, the containers will be coloured Wedgewood Blue. 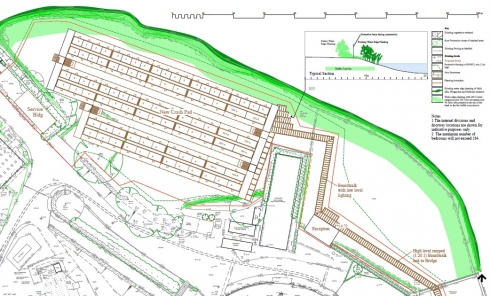 The new Crash Pad will be larger than the existing temporary hotel.

The park has previously applied for planning permission to install a 250-bedroom themed hotel with an associated health spa and conference centre, at a cost of £31-£33 million. It has recently made some minor amendments to this application, but the movie to retain the shipping container accommodation indicates that the hotel is not likely to open for some years.

The updated Crash Pad will feature a variety of room types.

The cost of installing the upgraded and expanded Waterfront Hotel is expected to be up to £9 million. Thorpe Park plans to keep the hotel in place for at least 10 years.