SkyRise Drop: The 800-feet-tall drop tower that could be on its way to Miami, Florida

Plans are underway to construct an enormous 800-foot freefall drop tower in Miami, Florida, as part of a plan to construct a 1000-foot tower in the city.

SkyRise Miami, which faces a number of obstacles before it becomes a reality, would also host a Soarin'-style "flying theater" ride and a 600-foot bungee jump attraction dubbed the SkyPlunge, along with a 500-seat ballroom and several nightclubs and bars. The headline attraction, though, would be the 800-feet-tall SkyRise Drop, which would shatter the record for "world's tallest drop tower". The SkyRise itself would be the second tallest tower in the US, behind the 1,148-foot Stratosphere Tower in Las Vegas. 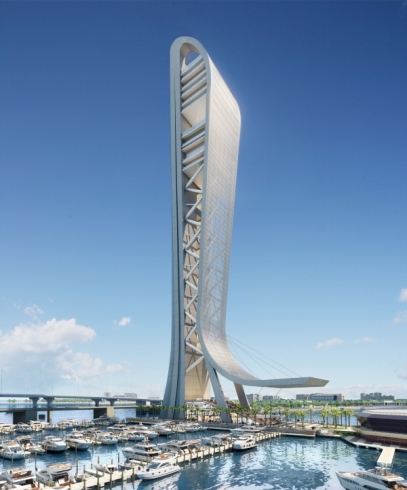 The SkyRise Drop would take the record for world's tallest drop tower, which will be set at 415 feet by Zumanjaro: Drop of Doom, which will open at Six Flags Great Adventure in 2014.

If construction goes ahead, SkyRise Miami will sit at the heart of Downtown Miami's Bayfront Entertainment Center, within walking distance of South Beach and close to a number of other major attractions. However, the proposal is yet to receive approval from city authorities.

The plans for SkyRise Miami follow hot on the heels of the Poler Coaster, an enormous, 520-feet-tall roller coaster that is further along in development. The final location for the Poler Coaster has yet to be announced, but it will be situated somewhere in Florida.