The world's tallest roller coaster is being planned for a yet-to-be-announced location in Central Florida, and is set to stand at an incredible 520 feet tall.

The Poler Coaster, a version of which was previously planned for Las Vegas, features a unique vertical design that means it occupies a much smaller footprint than a traditional coaster. It will be constructed by S&S Power and US Thrill Rides, and will also act as observation tower serviced by two glass elevators. Restaurants and retail outlets may be installed at the top.

Trains will be driven to the top of enormous tower, before circling around to allow riders to take in the view. They will be then be inverted, plummeting down the first drop in an upside-down position. This means that the ride will break the world records for both "tallest coaster" and "highest inversion". The coaster will use S&S Power's existing El Loco trains, which seat two across. 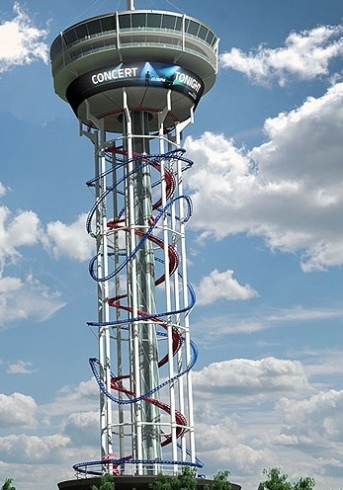 Another version of Poler Coaster, standing at "just" 350 feet tall, will be constructed at the Lakepoint Sports Complex north of Atlanta, Georgia. S&S Power and US Thrill Rides claim that deals have been signed for both coasters and that construction will begin in 2014, leading to a likely opening date in 2016.

If it is indeed built, the Florida version of the Poler Coaster will shatter the existing roller coaster height record of 456 feet, held by Kingda Ka at Six Flags Great Adventure.