The Big Debate: Which 2014 Florida attraction are you most looking forward to?

Some of Florida's greatest theme and water parks are set to unveil new attractions in 2014. But which one are you most looking forward to?

Orlando is arguably the theme park state of America and has many world class attractions to its name. From some of the best dark rides to award-winning themed themed attractions, the sunshine state is a popular escape for thrill seeking families across the world. 2014 is also set to be a big year for Orlando with some of the biggest Floridian theme parks opening a handful of exciting attractions.

The skyline to Busch Gardens Tampa Bay is set to undergo an extensive facelift with the introduction of Falcon's Fury. The colossal 335-feet-tall tower will rule the sky when it opens in the Spring. The tower will plummet riders to the park floor at 60mph at a 90 degree angle making it the first of its kind in the world.

Thrill seekers can also look forward to a new 105ft plunge into water at SeaWorld's Aquatica. The water park, located just off International Drive, will welcome its first new attraction since opening in 2008. Named Ihu's Breakaway Falls, the extreme nature of the attraction is being kept under wraps but promises to be one of the most extreme attractions around.

Elsewhere, for the family, Legoland Florida will open a new toddler-friendly area. Duplo Valley boasts an indoor play area for kids along with a few small attractions for the whole family. The flagship ride within the new area will be Duplo Train which will pass through the surrounding themed areas.

Universal Orlando is set to lift the curtain on one of the most anticipated themed attractions ever constructed. Building upon the success of The Wizarding World of Harry Potter which opened at sister park Islands of Adventure in 2010, the Diagon Alley expansion boasts a whole new level of thrills for Potter fans. The star attraction within the area is set to be a highly unique enclosed coaster themed to the Gringotts Bank. The exact nature of the attraction is still unknown but is set to use revolutionary roller coaster technology to take riders on an unforgettable journey through the bank. Special elements including tipping track and launch segments are rumoured features of the new coaster.

The iconic Hogwarts Express is set to feature in the new themed area. A life-size replica of the train will transport riders from the Diagon Alley to Hogsmeade inside Islands of Adventure.

Disney also has an exciting 2014 ahead. The Magic Kingdom park will unveil their first roller coaster in over a decade with the Seven Dwarfs Mine Train. The coaster, geared towards the family, is being built by Dutch manufacturer Vekoma and features a unique ride vehicle. The twisty track layout will allow the trains to swing from side to side; adding a unique twist to the ride experience. 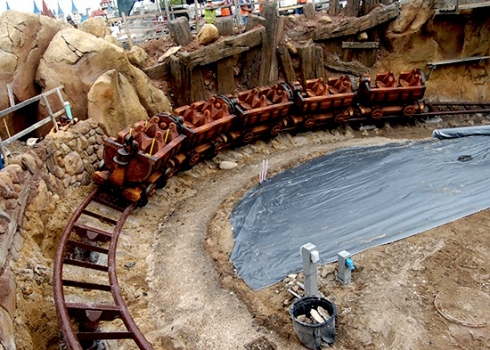 But which attraction are you most looking forward to? Vote now in our poll to voice your view...