Universal has officially confirmed that the Leaky Cauldron will be the signature restaurant at Universal Studios Florida's Wizarding World of Harry Potter - Diagon Alley.

Although it had been widely expected that the Leaky Cauldron would be a real, working restaurant as well as a facade, Universal confirmed this for the first time at London's World Travel Market conference. Little has been revealed about the nature of the restaurant, but it is promised that it will be "aimed at families and will feature a 360 degree experience".

Here's a look at the Leaky Cauldron as seen in the Harry Potter films:

In Harry Potter and the Prisoner of Azkaban, Harry stays at the Leaky Cauldron after riding the Knight Bus - which appears to be parked outside in this concept art for the Diagon Alley expansion: 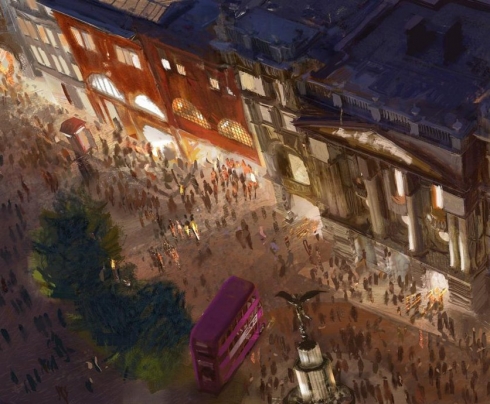 In the book, the landlord of the Leaky Cauldron serves up tea and crumpets for Harry - which could point to a potential menu item at the Wizarding World, given Universal's focus on authenticity. At dinner, Harry, Hermione and the Weasley family are served 5 courses, including chocolate pudding.

When will Diagon Alley open?

We're consistently asked this question, and we don't have an official answer as yet. However, Steve Burke - the CEO of NBCUniversal - has said that it will open in spring 2014, some time after the Cabana Bay Beach Resort debuts on March 14.