History will repeat itself at Kings Island in 2014! The park has announced that when it opens for the year next April, the Flight Deck suspended coaster (whose peculiar name is a result of de-branding the former Paramount Park's Top Gun: The Jet Coaster) will bear a striking new color scheme and name.

In 1981, Kings Island in Kings Mills, Ohio opened the world's first Arrow suspended coaster called The Bat. The dynamic coaster model featured bucket-like trains that hang under the track and can swing freely on banked turns. The Bat was quickly closed two years later after numerous technical difficulties had left the first-of-its-kind ride a hassle, but the suspended coaster concept took off as dozens more opened around the world like Cedar Point's Iron Dragon and Chessington World's of Adventure's Vampire. 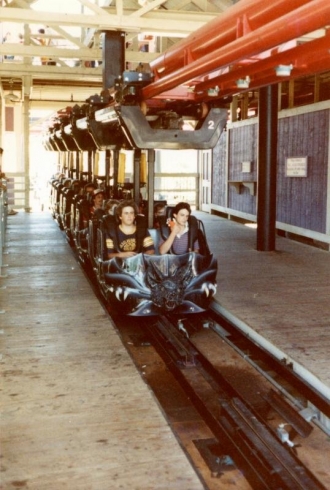 Kings Island's original Bat operated for only two years in the early 1980s, but spawned a generation of suspended coasters including the park's own Flight Deck. Via KIExtreme, click for link.

Allegedly as a sort of repayment for the Bat's failing, Kings Island opened the world's last Arrow suspended coaster, Top Gun, in 1993. The name was changed Flight Deck and much of the original station and queue themeing was hastily stripped in 2008 after Cedar Fair bought the park from Paramount's parent company. Still, folks have never warmed to the new name.

In 2014, Flight Deck will reopen as The Bat, repainted with orange track and charcoal columns as a testament to the original, which has remained a fan favorite and a sort of legendary ride at the park.

The Bat is located next to the park's new, under-construction Banshee in an area of the park currently called Action Zone and themed to a movie backlot. It remains to be seen how the area's look may change in coming years, but the beginnings of a "spooky" themed land have emerged with the new neighbors. The Bat's name and logo were purposefully leaked in August alongside images of a B&M Wing Coaster to distract fans from the approaching announcement of Banshee.