The Hogwarts Express train that will link the Harry Potter areas at Islands of Adventure and Universal Studios Florida has been installed on its track for the first time. 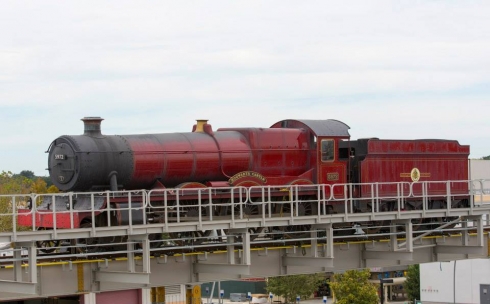 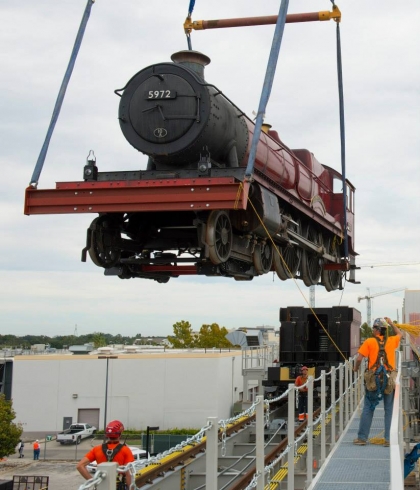 Riders on the Hogwarts Express will experience the journey between London and Hogsmeade (or vice-versa), just as Potter and his friends do in the books and movies. Although the train itself will actually travel through backstage areas of Universal Orlando, riders will instead see an audio-visual presentation that brings the journey to life.

Linking two distinct parks, the Hogwarts Express will be one of the most unique theme park rides in the world when it opens. It is currently the only attraction in our database of 3,500 rides and shows to be listed as belonging to two parks!

they got every last detail right except the buffers are missing.....

Wow! What beautiful locomotives they are & so detailed! They are obviously not proper steam engines, but kudos to Universal for recreating such magnificent looking engines. It's a shame they will run through the backstage area for most of the journey so won't be seen much by the General public except in the stations.

At the moment Universal is just blowing my mind with their constant reinvestment in the parks, what with an awesome new Springfield Area, (I'm addicted to Tapped Out!), the new Wizarding World area with what will surely be a fantastic E-ticket in the Gringott's Bank roller coaster & now talk of King Kong & Skull Island. Remarkable!