Is King Kong on his way to Universal Orlando's Islands of Adventure?

It's widely expected that a new Jurassic World-themed attraction is on its way to Islands of Adventure. But could King Kong be set to join the T-Rex in terrorizing guests?

According to the latest reports from the likes of Screamscape and HateToFly, yes. The rumors suggest that a recreation of Skull Island - Kong's home - is in the works, and that the headline ride will not be a simple recreation of King Kong 360 3-D at Universal Studios Hollywood. Instead, it could be a major dark ride with outdoor sections featuring high-capacity, safari-style vehicles.

The likely location for Skull Island is behind the Thunder Falls Terrace. Universal is already believed to be planning a major addition to the Jurassic Park area of Islands of Adventure, adding a second headliner ride to sit alongside the Jurassic Park River Adventure. This would tie in with the release of the fourth film in the series, Jurassic World, in 2015.

HateToFly claims that the T-Rex photospot in Jurassic Park is to be moved, possibly enabling work to begin on the Kong-themed area. Whether or not this will be separate to Jurassic Park or whether both will be part of a new, multi-themed land is not yet clear (and it's not yet clear that Skull Island will be built at all). 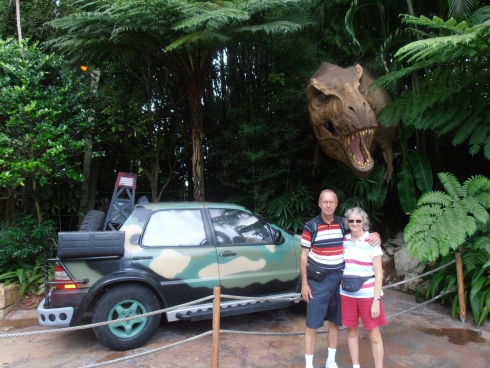 Here's the T-Rex in place just last month, about to devour my parents.

What do you think of Universal Orlando continuing its spending fee with the addition of Skull Island to Islands of Adventure? Is it a good idea, or would the money be better spent on other concepts? Leave a comment below and let us know!