New Fantasyland is entering its final phase as the new attraction progresses. The Disney Parks blog shared photos of the Seven Dwarfs Mine Train's first full test run, which signals the progression of the new attraction toward its 2014 opening. The multi-year expansion into "New Fantasyland" began in 2011 when Mickey's Toontown Fair - one of Magic Kingdom's lands - closed permanently. The area re-opened in March 2012 as an intricately detailed sub-area within New Fantasyland called Storybook Circus.

Throughout autumn and winter of 2012, the land became home to the family dark ride Under the Sea: Journey of the Little Mermaid, and two attractions based on 1991's Beauty and the Beast: a unique walkthrough-meet-and-greet-show called Enchanted Tales with Belle, and the signature Be Our Guest Restaurant. 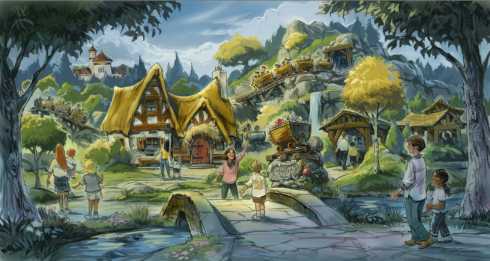 Guests will enter the grassy slopes and diamond mines near the Dwarves' cottage. © Disney.

The final phase in the land will see the formation of Magic Kingdom's fourth "mountain," a grassy hillside with crystal mines throughout. This will be the Seven Dwarfs Mine Train, a family roller coaster / dark ride meant, in part, to replace the Snow White's Scary Adventures dark ride that was lost for New Fantasyland's Princess Fairytale Hall (which opened in September 2013).

According to Disney, this new family coaster will rank in intensity "between" Storybook Circus' Barnstormer and the classic Big Thunder Mountain Railroad. It is yet unclear what the ride's layout will be or how much of the ride will feature dark-ride style scenes. 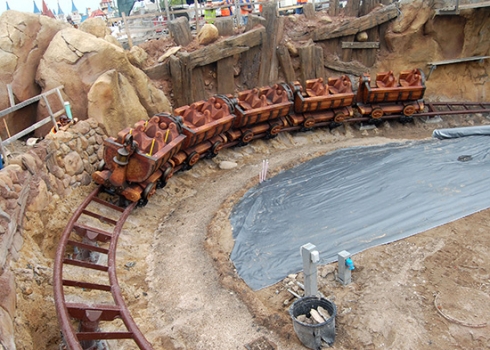 The slopes of the new ride look as detailed as any of Disney's other "mountains." Image © Disney.

The Seven Dwarfs Mine Train will also feature first-of-its-kind trains that will allow the passenger carts to swing side-to-side during portions of the ride's course just as mine carts do. Especially along banked turned in the ride's track, the trains will simulate rocking and tipping motions sure to be exciting for riders.

Though the ride has begun its testing phase, it is not yet near opening, as scenery and show elements have yet to be installed along the ride's layout. When it opens in 2014, New Fantasyland - the largest expansion in Magic Kingdom's history - will be complete.

You can keep up to date with all we know and think of Seven Dwarfs Mine Train as well as other new rides on our New Attraction Watch page. Stay up to date by following our Twitter as well, as we comment on new rides across the globe.