It's a retro family road trip in store at Valleyfair, with a new themed area. In 2014, Valleyfair (half of Cedar Fair's namesake alongside Cedar Point) will create an entirely new themed area of the park called Route 76 (named after the park's opening year).

The new "land" will highlight three of Valleyfair's rides from that year, relocating the park's classic Scrambler and Tilt-a-Whirl carnival rides decked out in new lighting and decoration. The park's Antique Autos will return with classic Cadillac cars. All will be located under the yellow towers of the park's Steel Venom twisted impulse coaster. 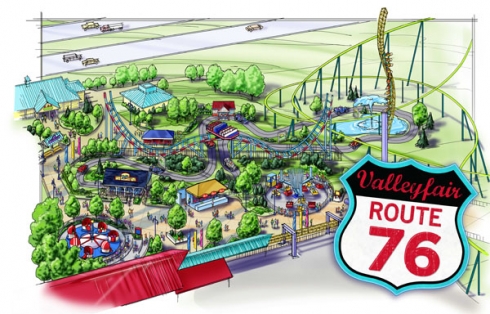 The centerpiece of the area will be a Zamperla Disk'O ride called Northern Lights that will rock back and forth on half-pipe style track as the 36-person ride vehicle spins and swivels. The antique cars will pass picturesquely under Northern Lights' structure, which will project purple, green, and blue lights to simulate the natural phenomenon of the same name. 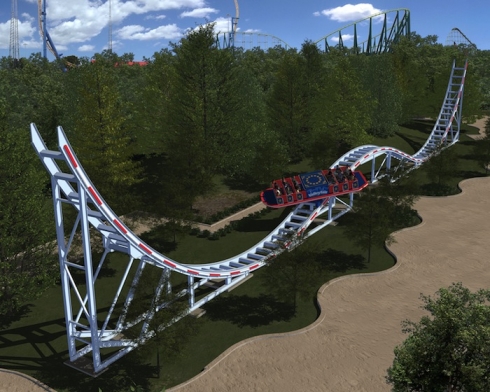 Route 76 is the latest in a series of detailed revitalization projects by Cedar Fair. After acquiring the half-dozen Paramount Parks in 2007, Cedar Fair meticulously re-crafted their various mis-matched childrens' areas into Planet Snoopy areas over the course of recent years. Kings Dominion recently announced that its 2014 project would see two of its themed areas return to the names and themes they carried when the park first opened.

Route 76 a distinct change from the style Cedar Fair had been known for before the aquisition of the movie-themed Paramount Parks, as it had historically shied away from dark rides and themed areas. Many expected this sort of change, as well, when the former president of the Disneyland Resort, Matt Ouimet, was selected as Cedar Fair's new CEO in early 2012.