The rat is out the bag and something impressive is coming to Walt Disney Studios Park. It was all the way back in February that Euro Disney Chairman Philippe Gas alluded to a new technological dark-ride themed to Disney-Pixar's Ratatouille that would surface at Disneyland Paris' Walt Disney Studios Park in 2014. Fans have been privy to the impending attraction for even longer, certain that Remy the rat will be the driving force behind a fundamental change at the troubled second Parisian park.

Now, it's official. Ratatouille: L’Aventure Totalement Toquée de Rémy will open at Walt Disney Studios in 2014 in a new, hyper-detailed and precisely themed Parisian corner of the park. The ride will feature LPS (Local Positioning Satellite) technology that will allow multiple ride vehicles to take different paths through the track-less attraction, no doubt spinning, swirling, and interacting with other riders along the way. This same technology has been used to tremendously positive reception at Hong Kong Disneyland's Mystic Manor, Tokyo Disney's Pooh's Hunny Hunt and Aquatopia, and SeaWorld Orlando's Empire of the Penguin. 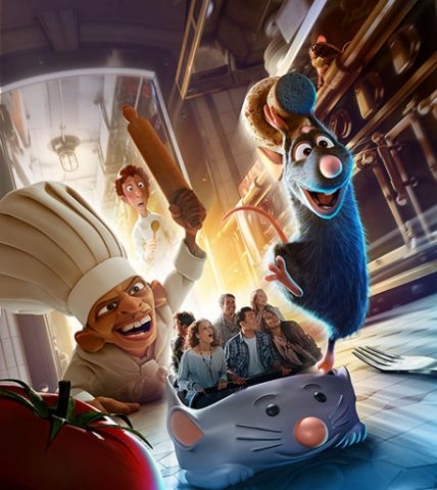 Prepare for a chaotic kitchen adventure with Remy. Image © Disney.

It's rumored that the Paris incarnation of the technology will also include interactions with projected scenes - perhaps in all-surrounding domes - that will see rat-sized guests causing mischief in the kitchens of Gusteau's restaurant.

The ride's name, Ratatouille: L’Aventure Totalement Toquée de Rémy, translates to Ratatouille: The Crazy Adventures of Remy, though the word Toquée means both "crazy" and "chef's hat" in French - a play on words that French fans will enjoy. There is still no word on in the attraction's name will be translated to English or if it will only be titled in French as is the case with many of the resort's other attractions.

Keep up to date with all the latest in park additions using our New Attraction Watch page. Read our preview of the new Ratatouille attraction (then rumored to be named Ratatouille: Kitchen Calamity) and tell us if you think this groundbreaking dark ride will make the miniscule Walt Disney Studios park worthy of a visit!

Looking forward to this exciting attraction. However the ride vehicle looks hideous!!