Canada's Wonderland will open a new 4D dark ride inside its iconic Wonder Mountain in 2014, in a move that could be indicative of a change of direction from owner Cedar Fair.

Wonder Mountain's Guardian will be an interactive ride based on a 1,000-foot roller coaster-style track, and will be themed around a mythical creature that lives inside the mountain. Riders will first climb up the side of the mountain, before plummeting through its interior. The surrounding scenes are set to include a desolate forest, an underground lake and "Draconian City". A final battle inside a dragon's lair will be designed to "shock".

Fittingly, Montreal-based Triotech has developed the technology behind Canada's Wonderland's new ride. Wonder Mountain's Guardian will feature 3D effects overlaid with 4D elements such as wind and water tricks. RIders will be equipped with weapons boasting "The fastest, most-accurate target system", with "real-time graphics" being employed to show the impact of their shooting. The world's longest interactive screen will help to add to the immersive experience.

Triotech CEO Ernest Yale said of its Cedar Fair's foray into dark rides: "This new ride at Canada’s Wonderland will be a one of a kind, never seen before attraction. It will bring the best elements of the physical, virtual and multi-sensory world. All this combined in a fully immersive and interactive experience." 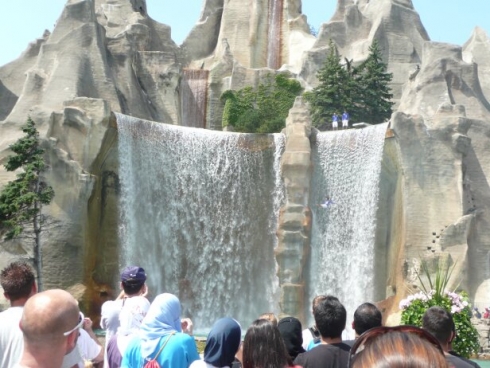 The existing Wonder Mountain will host the new dark ride.

Cedar Fair has traditionally stuck to roller coasters and flat rides, leaving dark rides to likes of Disney and Universal, with their larger budgets and deeper pockets. However, CEO Matt Ouimet - formerly of Disney - has promised on several occasions to investigate the possibility of installing low-cost dark rides at its parks, and it seems that Wonder Mountain's Guardian could be the first of many. The ride reportedly carries a budget of just $10 million - a fraction of the amount that Disney and Universal spend on their creations.

Canada's Wonderland's General Manager Norm Pirtovshek is confident that the ride will be a success: "We felt the timing was right to enter the massive caverns of Wonder Mountain and provide our guests with a new dimension of thrills. Thrill seekers from all generations will be amazed by the combination of unique ride thrills and immersive 4-D interactive action as they compete for ride supremacy."