Cedar Point has announced the addition of two new rides for the 2014 season - a Zamperla Disk'O Coaster and a flying scooters attraction. In addition to installing the attractions, Cedar Point will also undertake a major renovation of Hotel Breakers. The 650-room hotel overlooks Lake Erie, and first opened in 1905. The exterior will be modified first, in winter 2013/14. The following winter, the hotel's interior will receive a similar treatment. 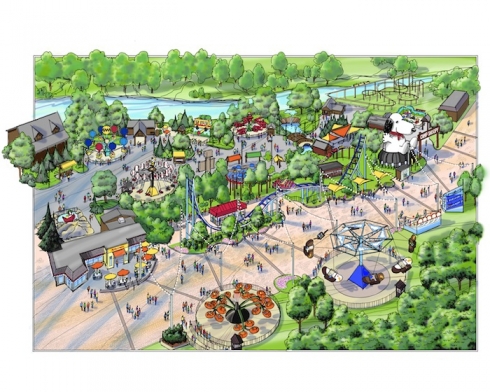 Both new rides will be installed close to each other on the Gemini Midway, as can be seen in the concept art above. They will join Gemini, Monster and several other attractions in the area's line-up. On the way out will be kiddie drop tower Frog Hopper, which will be moved to Camp Snoopy and renamed Woodstock's Airmail. Jr. Gemini, meanwhile, will be renamed Wilderness Run and the entrance also moved to Camp Snoopy. 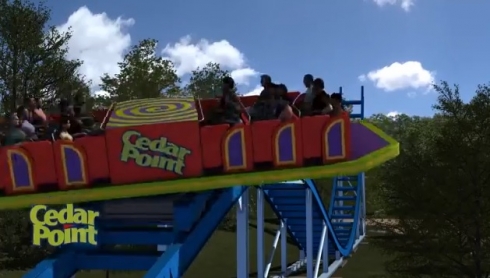 The Disk'O Coaster, dubbed Pipe Scream, will be similar in style to Surf Dog at sister park Kings Island. It will see riders seated on a rectangular gondola, which will race up and down an undulating, coaster-style track, spinning as it goes. A "camelback" hill creates a floating sensation in the centre of the ride's circuit. 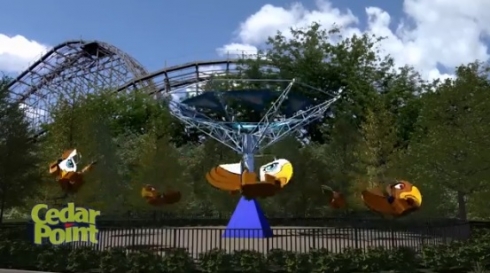 The second new ride, Lake Erie Eagles, will be a flying scooters attraction similar to those of days gone by. It will feature eight glider-style vehicles that rotate around a central tower, with riders able to control the height of their individual eagle.

The video above features a contest-winning family introducing the new attractions, and includes 3D rendered footage of both Lake Erie Eagles. Both new additions are due to open in May 2014. You can keep up to date with the latest confirmed and rumored opening dates for new attractions through Theme Park Tourist's "New Attraction Watch" section, and by signing up for our weekly newsletter.