Located around The Simpsons Ride, which debuted in 2008, Springfield brings to life a host of recognisable locations from the TV show. This includes a wide range of dining locations in the Fast Food Boulevard area (reviewed here) and the new Kang & Kodos' Twirl 'n' Hurl interactive flat ride. 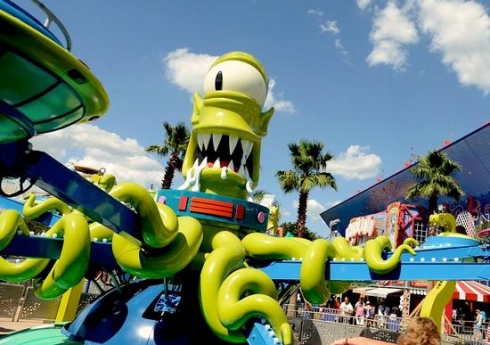 James L. Brooks, executive producer of The Simpsons said: "I hope everyone has as much pure, irresponsible fun as we did writing the ride, signs and food menus. We raise our Flaming Moe's to ye."

Universal Creative's President Mark Woodbury chimed in to say: "When creating Springfield, we wanted to make guests truly feel like they're part of the record-breaking animated show. Now fans can become part of The Simpsons family and step inside the same places Homer and his family visit on a regular basis".

What do you think of the Springfield area? You can rate and review its rides and restaurants by visiting our Universal Studios Florida guide.