Both parks will host a new haunted house based on series 3 of the AMC production, rather than a simple replica of 2012's maze. The maze will be set in the West Georgia Correctional Facility and the town of Woodbury, both of which featured in the series. It will include interior scenes set inside the prison and outdoor scenes set in the town. 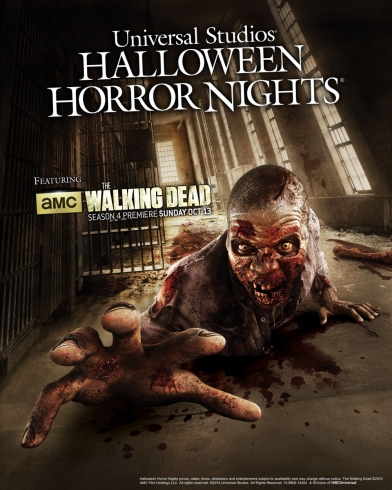 In addition to the maze, Universal Studios Florida will host a number of street scenes based on the show, including the iconic Hershel's barn. "Walkers" (zombies) will roam the streets.

Over at Universal Studios Hollywood, the "Terror Tram" version of the park's famous Studio Tour will feature a scene set outside the prison.

John Murdy, Creative Director for Universal Studios Hollywood said: "What's great about working with a property like The Walking Dead is that each season presents new environments and characters for us to draw inspiration. With the prison as the main setting of Season 3, we seized this opportunity to recreate that very environment, down to the last detail, to be as genuine and authentic to the show as possible. Using movie-quality production value, our goal is to make guests feel as if they are mired in the world of blood-thirsty zombies, which is something you can only do at Halloween Horror Nights."

"The goal is always to surround guests with authentic and terrifying experiences," said Michael Aiello, Creative Development Director for Universal Orlando's Entertainment team. "The combination of The Walking Dead themed street experiences and the haunted maze will make it difficult for our guests to escape the hordes of ravenous walkers they've seen on their television. The moment you pass through our gate, you become a survivor fighting for your life."

The Walking Dead tells a familiar story of a world that been overrun by zombies, and could be likened to an episodic version of George A. Romero's Living Dead movies.