The first car for the under-construction Seven Dwarfs Mine Train roller coaster at Walt Disney World's Magic Kingdom has arrived on site, ahead of the attraction's debut in 2014.

The official Walt Disney World Twitter account posted an image of the mine car yesterday, surrounded by the team working on the ride. The Seven Dwarfs Mine Train will use a first-of-its-kind ride system that will allow the vehicles to swing back and forth as they move along its twisting, turning track. 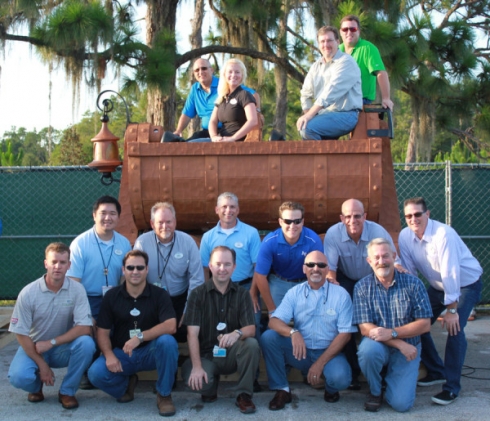 Construction of the track for the new coaster was completed in June. A huge amount of theming work remains to be completed before the ride opens to the public, as well as extensive testing with the newly-arrived trains. The swinging cars are likely to require some tweaking before the ride launches, given the potential to cause nausea.

The Seven Dwarfs Mine Train will take guests on a musical ride deep into a diamond mine, accompanied by tunes from the classic animation Snow White and the Seven Dwarfs. The coaster's circuit will feature both indoor and outdoor sections. It will be the final new attraction to form part of the expanded New Fantasyland area at the Magic Kingdom,

You can find further details of the plans for the new roller coaster at Walt Disney World's Magic Kingdom in our preview of the Seven Dwarfs Mine Train coaster.