The Universal Orlando Resort has revealed further details of the attractions that will complete the Springfield area, which partially opened earlier this month.

The Fast Food Boulevard area of Springfield is already up-and-running, serving a range of different food types from a selection of restaurants themed around recognisable locations from The Simpsons. It is located close to The Simpsons Ride, which opened in 2008 in place of Back to the Future: The Ride. 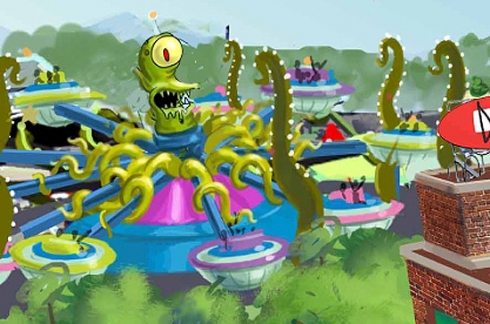 One of the biggest new additions to the Springfield area is a new flat ride, dubbed Kang & Kodos' Twirl 'n' Hurl. The ride will feature the aliens made famous by the Treehouse of Horror episodes of The Simpsons, and will see guests spinning and bobbing up and down on the end of long arms. Due to open later in summer 2013, the ride will be themed around an attack on Springfield by the extraterrestrial pair, and will feature twelve three-seater cars will rotate around the central model of Kodos.

Elsewhere in Springfield, guests will be able to have their photo taken with Duffman, Chief Wiggum and Milhouse Van Houten, as well as the iconic statue of the town's founder, Jebediah Springfield.

Several further eateries are still under construction, including Bumblebee Man's Taco Freshos truck, which will be 30 feet long. Elsewhere, Lard Lad Donuts will feature the huge statue seen in the show, and the Duff Brewery will serve several varieties of Duff Beer.

Further details of the Springfield updates can be found in a report by the Orlando Sentinel, which was invited to tour the site.