The headline attraction in the new World of Chima area at LEGOLAND Florida, The Quest for CHI, has been "christened" in a special ceremony by a group of child ambassadors.

Buddy's Brick Bunch, a group of six children who serve as ambassadors for the theme park, were on hand as the first boat was floated on the water ride's circuit. They were also given a tour of the World of Chima construction site ahead of the new land's July 3, 2013 opening date. 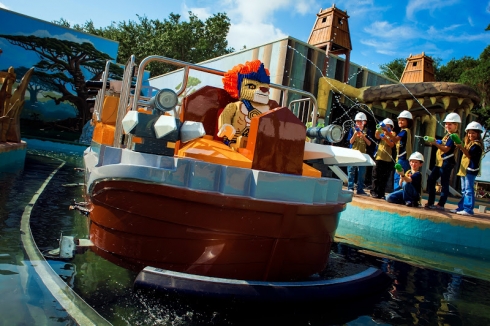 The World of Chima expansion will be themed around the LEGO Legends of Chima toy line, which features animal warriors who compete for a mystical energy force, CHI. Its headline attraction is the Splash Battle-style The Quest for CHI, while it will also boast a new 4-D movie and an arena where guests can "do battle" with their favourite LEGO Chima toys.

The Quest for CHI will feature extensive theming including the enormous Lion Temple and a 45-feet-tall floating mountain known as Mount Cavora. Riders will board boats that are equipped with water cannons, and will be challenged to help Laval the Lion Prince defeat Cragger the Crocodile King as he attempts to steal the supply of CHI.