The Guinness Book of World Records has officially confirmed The Smiler roller coaster at Alton Towers as having more inversions than any other coaster.

The Smiler, which will open on May 23, 2013, is currently undergoing testing. One of its trains can be seen traversing one of its record-breaking 14 inversions in the image below, which shows the ride being conducted into the Guinness Book of World Records. 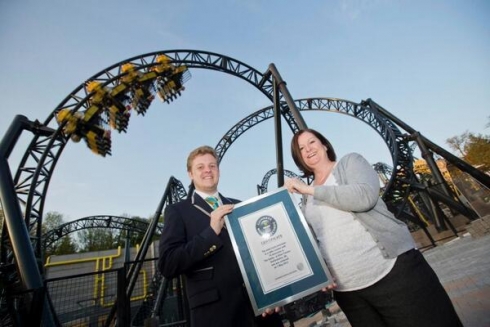 The Smiler, which had previously been known by its codename of "SW7", is being installed at a cost of some £18 million. Its circuit will feature two lift hills and will be located alongside the existing Oblivion roller coaster in the X-Sector area.

If you're planning a visit to ride The Smiler, check out our Alton Towers deals pages for all the latest special offers and discounts.