Walt Disney World has revealed that the popular "Carbon-Freeze Me" experience will return for the 2013 Star Wars Weekends at Disney's Hollywood Studios, which will run from May 17 - June 9, 2013.

As with last year's offering, the experience will be inspired by a scene in Star Wars Episode V: The Empire Strikes Back in which hero Hans Solo is "frozen" in carbonite. After guest enter a "carbon freezing chamber", 3-D face scanning equipement is used to produce an 8-inch figurine of them. 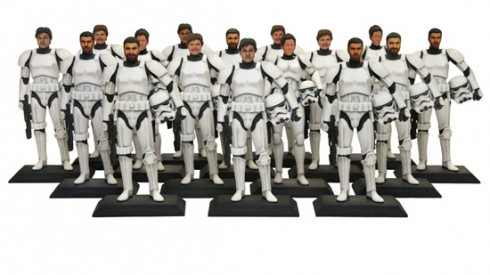 In 2012, guests' faces were placed atop a model of Hans Solo's body. For 2013, a second option will be introduced, allowing guests to instead have their face placed onto the body of a Stormtrooper.

Guests from the USA will receiver their figurine within 7-8 weeks, with international shipments taking a little longer. They will also be able to choose between receiving a Carbon-Freeze Me light-up band or a collector button. The total cost will be $99.95 plus shipping costs and sales tax.