Timber Mountain Log Ride to reopen at Knott's Berry Farm on May 30, 2013

Knott's Berry Farm has confirmed that the Timber Mountain Log Ride will reopen to the public on May 30, 2013, following a lengthy refurbishment.

The ride, which is widely credited as being the inspiration for Disney's Splash Mountain, has been closed for several months to enable refurbishment and restoration work to take place. Knott's Berry Farm has not revealed the precise budget for the upgrade, but has confirmed that it is making a "multi-million dollar" investment in the project.

The animatronic characters that accompany the opening dark section of the Timber Mountain Log Ride have been "revitalized" by Garner Holt Productions, a leading supplier of animatronics to Disney and other theme park operators. Knott's Berry Farm has promised that all of the ride's characters and scenes will be updated, with additional ones being added as part of the refurbishment work. However, the ride's original storyline will be retained. 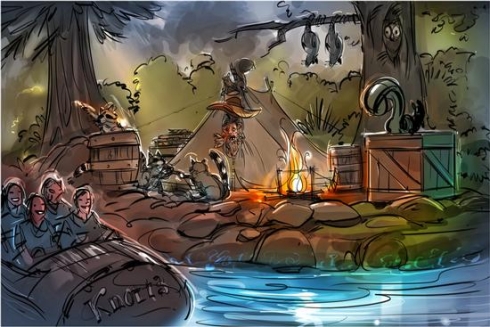 The Timber Mountain Log Ride is a classic log flume water ride, manufactured by former Disney supplier Arrow Dynamics. It was only the second attraction of its type to open in the US, following El Aserradero at Six Flags Over Texas. Themed around a nineteenth century lumber camp, it was designed by Bud Hurlbut and first opened to the public on July 11, 1969.

The ride's reopening will come less than a week after three new attractions debut in the Knott's Boardwalk area on May 25.