Knott's Berry Farm has released a new image showing off progress on the construction of Coast Rider, the new family roller coaster that will debut at the park on May 25, 2013.

Coast Rider will be one of three new additions to the Knott's Boardwalk area of the park. It will be an Extended Wild Mouse coaster manufactured by German firm Mack, featuring a large number of sharp hairpin turns packed into a 1,339-foot circuit.

Coast Rider's 52-foot lift hill is now in place, as an be seen in the image below: 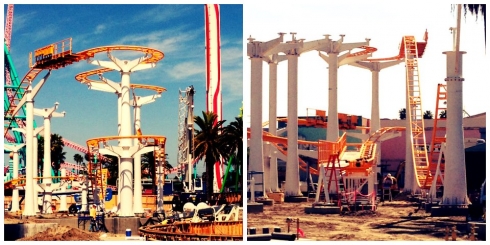 The other two new additions will be also be aimed at families. Surfside Glider will be a traditional midway ride in which riders board two-men "aircraft" that rotate around a central column. Pacific Scrambler will be the final addition, sending guests into a spin as they rotate both clockwise and counterclockwise. All three rides will fit into the space created by the removal of the former Perilous Plunge water ride.

Perilous Plunge was closed on September 3, 2012, having originally claimed the title of "tallest water ride in the world" when it debuted in September 2000. It saw guests being carried in large boats to the top of a 121-foot tower, before plummeting down a 115-foot, 75-degree drop into a splash zone below.