Confirmed: "Mickey and the Magical Map" show to debut at Disneyland on May 25, 2012

Disneyland has confirmed that the new Mickey and the Magical Map show will debut in the Fantasyland Theatre on May 25, 2013.

The show will star Mickey Mouse in his Sorcerer's Apprentice persona, and will feature a range of musical numbers. The plot will revolve around "wise sorcerer" Yen Sid, who tells Mickey of a mysterious map that has the power to transport dreamers to any place they can imagine. Mickey attempts to paint an unfinished spot on the map, triggering a dramatic adventure through a range of exotic, imaginary worlds.

Disney has revealed that an enormous version of the map will play a key part in the show. Mickey will travel east to meet the "coolest of jungle beasts", King Louie, before heading west to meet storybook heroines Pocahontas, Mulan and Rapunzel. In the south, he will head under the sea to meet characters from The Little Mermaid, while the north will host a "Hawaiian Roller Coaster Ride". 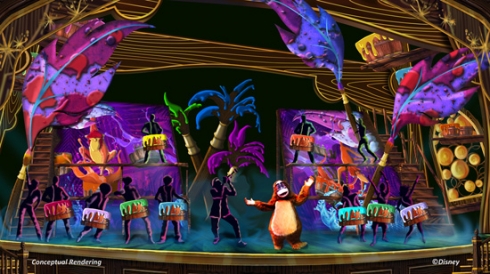 The Fantasyland Theater previously hosted meet-and-greets with Disney Princesses, but was vacated when they moved to a new home in the Fantasy Faire area. The theater has not hosted a Broadway-style musical since 2006, when the Princess Fantasy Faire moved into the location.