Doubts have been raised over the ambitious Adventure World Warsaw project after a major supplier revealed that it did not expect to be paid for work completed so far.

The Financial Times reports that Dutch infrastructure firm Imtech claims to have carried out work worth €77m on the theme park resort so far. However, it says that the project's backers have failed to make scheduled payments on time, with financing not yet in place. Imtech doesn't expect to be paid at all, and has written off the value of the work.

The move puts the entire Adventure World Warsaw project in doubt, with significant construction work still remaining to be completed. The project broke ground on July 21, 2012, but Imtech's review of its involvement could cause significant delays. For its part, Adventure World Warsaw says it still expects to secure financing by the second quarter of 2013, and other suppliers have reported being paid in full.

The backers of the Adventure World Warsaw, which will be located within 30 minutes drive of Poland's capital city, hope that it will develop into one of Eastern Europe's leading tourist attractions. As well as a theme park, the 240-acre site will host two hotels, a water park and entertainment area featuring cinemas and restaurants. 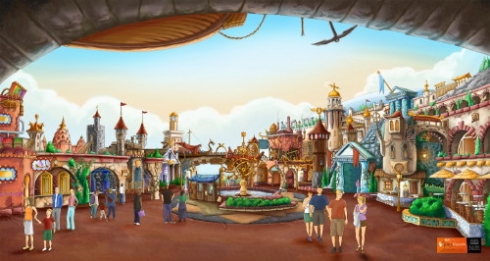 Adventure Harbour will be located at the entrance to the park.

The construction of Adventure World Warsaw is expected to cost some €400 million, and is due to be completed by 2014. It will feature 25 rides and shows when it opens, spread across five themed lands. These have working titles of Adventure Harbour, Creature Lagoon, Castle Island, the Land of Legends and the “Polski” Plaza.

If the initial phase of the project proves to be a success, a second theme park, an entertainment village, conference facilities and a fitness centre could be added to Adventure World Warsaw in the future.