California's Great America has installed the highest section of the new Gold Striker roller coaster, which is due to open in time for the 2013 season.

Manufactured by Great Coasters International, California's Great America's new addition will stand at 108-feet-tall and will hit a top speed of 53.7 miles per hour at the base of its 103-foot first drop. The ride's circuit will feature a series of banked turns and "airtime" hills, with the design being based on plans that were originally put forward several years ago before being dropped.

The image below shows the pinnacle of Gold Striker's lift hill being put in place: 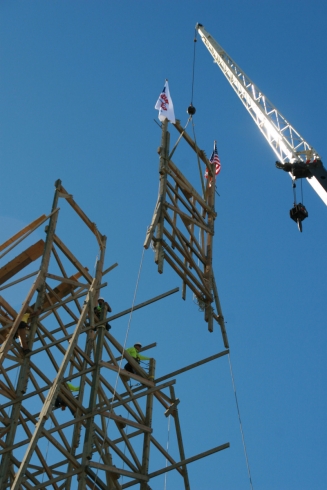 Raul Rehnborg, the Vice President of California's Great America, said of the topping off ceremony: "This is a milestone event in Gold Striker's construction and we are thrilled to bring this new ride to our fans in 2013. Gold Striker will provide the nostalgia of a wooden coaster, along with an incredibly smooth ride. Everyone who enjoys thrill rides will want to experience Gold Striker."

An official preview video for Gold Striker is embedded below:

As can be seen in the video, the first drop of Gold Striker will be wrapped around the 200-foot Star Tower observation tower. The tower will now be housed within the coaster's circuit, adding a new visual element for riders.