Walt Disney World has big plans for its MyMagic+ system, which it hopes will revolutionise the guest experience at its theme parks and hotels. However, if a new report is to be believed, software issues are set to delay its debut by several weeks. Meanwhile, SeaWorld San Antonio is to introduce a clone of SeaWorld Orlando's Pets Ahoy! show, and Kentucky Kingdom's prospective new operator is to begin examining the condition of the shuttered park's rides.

Walt Disney World has reportedly been forced to delay the roll-out of its new MyMagic+ system until late February or early March. Issues with the FASTPASS+ ride reservation system, which enables guests to pre-book slots on popular attractions, remain to be resolved by software engineers.

The Disney Parks Blog offers a sneak peek at the updated menu for the California Grill at Disney's Contemporary Resort, which will close for a lengthy refurbishment period on February 1. The restaurant is expected to reopen in late summer 2013, with its highly-visible kitchen still being a major feature.

Pets Ahoy!, a new comedy show starring a variety of rescued animals, will debut at SeaWorld San Antonio in June 2013. The new addition will be similar in style to the existing Pets Ahoy! show at sister park SeaWorld Orlando, which sees dogs, cats, birds and other species climbing, jumping and interacting with trains.

Nakai, a killer whale that suffered a gaping wound in September at SeaWorld San Diego, is now performing once again at the park. The injury has largely healed, with vets said to be pleased with his progress.

After finally agreeing a lease deal with the State Fair Board, former owner Ed Hart is now drawing up plans for the refurbishment and reopening of Kentucky Kingdom. Hart's Kentucky Kingdom Redevelopment Company is said to be ready to begin examining the condition of the park's rides next week, with the fate of attractions such as wooden coaster Twisted Twins hanging in the balance.

With the Tokyo Disney Resort gearing up for its 30th anniversary celebrations, the Disney Parks Blog offers a sneak at the costumes that will be worn by Mickey, Minnie and friends during the festivities. 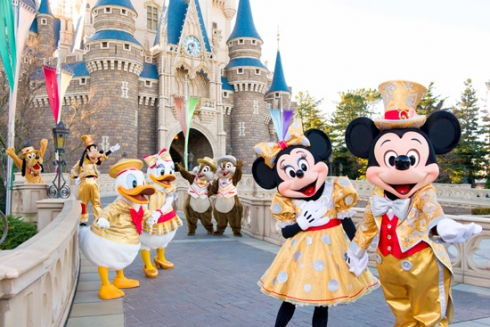