Disney has been teasing fans recently with cryptic preview videos for the flying dragon that will soon be soaring over New Fantasyland at the Magic Kingdom, and its most recent effort is the most blatant yet. Expect to the see the micro-light dragon in action very soon. Meanwhile, rumors that Despicable Me: Minion Mayhem will soon be on its way to Universal Studios Hollywood have been further strengthened, while Cedar Point is planning to invest millions in a major upgrade of its on-site hotels.

Disney has all but confirmed that a flying dragon will soon be soaring through the skies above New Fantasyland at the Magic Kingdom with its latest teaser video. The dragon, which is actually a micro-light aircraft, has also been spotted by eagle-eyed fans undergoing night-time testing in recent days. It is expected to appear at the park on or shortly after the official debut of the expanded land on December 6. 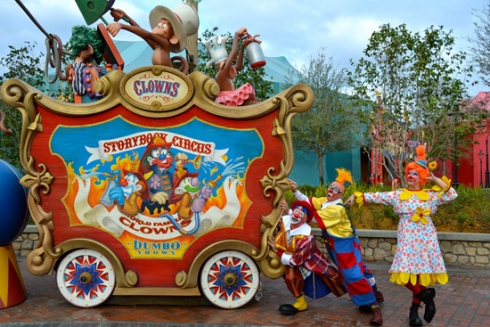 The clowns perform a variety of musical numbers, as well as traditional circus tricks.

The new Buena Vista Street entrance area at Disney California Adventure is celebrating its first Christmas, and Disney has released a new video showing off the 1920s-style decorations.

In an interview with Flickering Myth, Gary Goddard, who worked on the installation of Terminator 2 3-D: Battle Across Time at Universal Studios Hollywood, has corroborated long-standing rumors that the soon-to-close attraction will be replaced by a clone of Universal Studios Florida's Despicable Me: Minion Mayhem.

Cedar Point has installed the highest piece of track for its new GateKeeper roller coaster, which will become the world's longest winged coaster when it debuts in May 2013.

Meanwhile, the park plans to spend $60 million over the next three years to upgrade its existing on-site hotels, as it aims to encourage multi-day visits.

SeaWorld has released its first video preview of Aquatica San Diego, the new water park that will be installed on the site of Knott's Soak City in Chula Vista in 2013.