The theme park season is drawing to a close in the UK, with Alton Towers having brought down the curtain down on 2012 with a spectacular fireworks display. Drayton Manor, though, will open on a limited basis for its Magical Christmas events, while Adventure Island is celebrating the debut of a brand new thrill ride. In Europe, PortAventura is now under new ownership, while Tivoli Gardens will open a new children's area in 2013.

The park's 2012 season ended on November 4 with a spectacular fireworks display. There was minor drama afterwards, though, with fire engines being called to the park to extinguish "smouldering material" in the Cloud Cuckoo Land area.

Drayton Manor is gearing up for its annual Magical Christmas events, which will kick off on Friday, November 16. This year's events will feature a "Knight Before Christmas" theme, with the Excalibur boat ride being converted into the "home of Father Christmas". A fireworks display over the ride's castle will be held each night during the festivities, and kids will also receive a free storybook.

Returning for 2012 will an abridged version of animated movie Polar Express, hosted in the park's 4-D Cinema. The theatre features 152 moving seats and a variety of special effects such as water sprays and air blowers.

The events will run every weekend (Friday-Monday) until Christmas, with the park closing on December 24, 25 and 26. It will then return to daily opening from December 27 through January 7.

Adventure Island in Southend-on-Sea, England, has officially opened its new Time Machine ride. Seating 16 people, the attraction subjects riders to forces of 3.7g as they spin at high speeds in an upside-down position. The park claims that its latest addition is a "world's first" attraction, and estimates its cost at £3-4 million. General Manager Robert Roberts is said to have invented the contraption, designing it to be a "really intense and totally unique thrill experience".

After several years of financial struggles and question marks over its long-term future, the Camelot theme park in Lancashire, England has confirmed that it will not reopen for the 2013 season.

Blackpool Pleasure Beach has confirmed that its Monorail ride will become the latest historic attraction to close, as the park continues to trim costs.

PortAventura is now under new ownership, with Italian private equity firm Investindustrial having taken full control of the Spanish resort. The group had already acquired a 50 percent stake in 2009, and will now pay Spanish bank La Caixa €120m for the remaining half.

Tivoli Gardens will open a 1200 square metre expansion in 2013, The Merry Corner, which will accommodate several rides aimed at younger guests. The area will host rethemed versions of Den lille Flyver (The Little Pilot) and Det gyldne Tarn (The Golden Tower), as well as a new Zamperla Air Race ride. 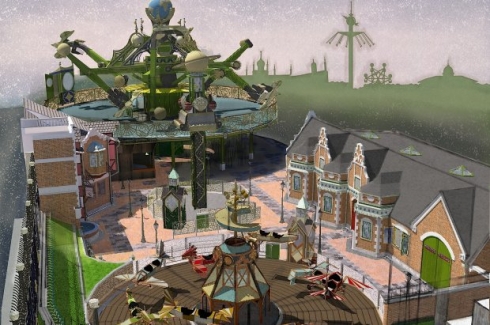 Former children's Ferris Wheel ride Det store Ur (The Big Clock) will be removed to create room for the new additions.