Disney acquires LucasFilm - are its theme parks set for a "Star Wars" bonanza?

Few fans of Disney theme parks or Star Wars will have missed yesterday's news that Disney is to acquire the company behind the legendary sci-fi franchise, LucasFilm, for $4.05 billion. It has already promised to produce a seventh Star Wars movie for release in 2015, with further movies following every two to three years. The potential to further exploit the deal through live-action TV series, animated cartoons, books and merchandise appears almost limitless.

Of course, the majority of Theme Park Tourist readers are primarily interested in what the deal could mean for Disney's theme parks across the globe. There's already a longstanding relationship between Disney and Star Wars creator George Lucas, with the original Star Tours and revamped Star Tours: The Adventures Continue attractions having been the most notable result. The Star Wars Weekends at Disney's Hollywood Studios also continue to draw in large crowds, despite the lengthy gap since the release of the sixth movie in 2005.

Given this past relationship, it's likely that Disney's Imagineers have drawn up dozens of concepts for Star Wars attractions over the past three decades. However, it's by no means certain that any of these will suddenly be thrust into production, or that Disney will divert resources away from existing, capital-intensive projects such as Avatar Land at Disney's Animal Kingdom in favor of LucasFilm-related attractions.

Still, when you throw $4 billion at a franchise, it's likely that you're going to want to exploit it anyway you can. The arrival of new Star Wars movies will provide perfect opportunities for Disney to cross-promote them with new attractions in its theme parks, and the LucasFilm deal carries none of the complexities of Disney's Marvel purchase (and Marvel's pre-existing relationship with rival Universal Orlando).

With that in mind, let's take a look at some of the short-term, medium-term and long-term Star Wars projects that are currently rumored to be in the pipeline at Disney theme parks.

Earlier this year, rumors surfaced that in addition to finally upgrading the badly-aging Star Tours to the newer Star Tours: The Adventures Continue, Disneyland Paris will go one step further and create a whole new mini-land dedicated to Star Wars at the rear of Discoveryland. This would incorporate several existing attractions, shops and facilities, including the similarly-obsolete Captain EO and the Buzz Lightyear's Pizza Planet restaurant. 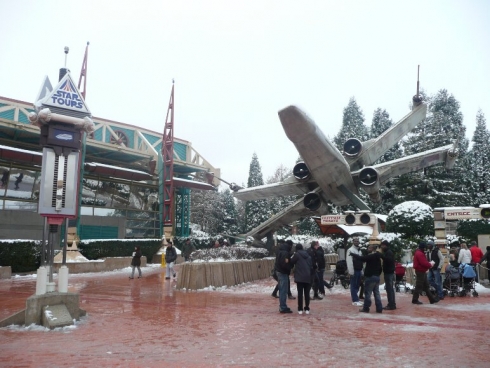 Captain EO would reportedly be converted into a version of the Jedi Training Academy at Disney's Hollywood Studios, enabling young guests to "train" to become a Jedi. Pizza Planet, meanwhile, would become a recreation of the legendary Mos Eisley Cantina, complete with the unusual band playing in the background.

The bad news? Disneyland Paris fans will probably have to wait until 2015 at the earliest for the Star Wars Land, if it goes ahead. That would see it open one year after the debut of the long-awaited Ratatouille dark ride at Walt Disney Studios.

The pod-racing scene is a highlight of Star Tours: The Adventures Continue.

Another long-rumored project that is claimed to have been dusted off in recent months is the addition of Star Tours: The Adventures Continue to Hong Kong Disneyland. The Hong Kong resort remains the only one of Disney's outposts not to host either the original or updated version of the Star Wars simulator ride, and there were hints in local reports back in January that the park is again planning an "amusement facility with a theme similar to Star Wars". Of course, it's still busy at present with its existing expansion plans.

Disney's Hollywood Studios is perhaps the most Star Wars-heavy theme park in Disney's global line-up. It already hosts a version of Star Tours: The Adventures Continue, as well as the Jedi Training Academy and the annual Star Wars Weekends. On top of that, it is home to the Indiana Jones Stunt Show Spectacular, based on another of LucasFilm's most famous properties (albeit one that Disney placed no value on in the acquisition price, due to an existing distribution relationship with Paramount). 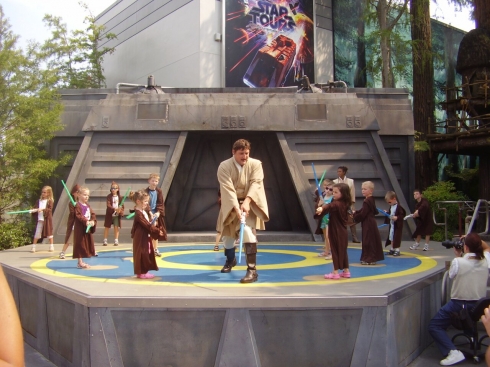 The Jedi Training Academy is a popular fixture at Disney's Hollywood Studios.

Current rumors relating to the park point to the addition of a clone of Cars Land at Disney California Adventure, which has already proven to be a critical hit and a major draw for guests. Predictably, some fans are now speculating that this could be dropped in favor of a Star Wars-focused expansion, with several plans believed to have been drawn up over the years for full-blown lands dedicated to the franchise. Disney's Imagineers are known to have looked at several different concepts for Indiana Jones over the years, too, although it would seem that the company plans to double-down on Star Wars when the deal goes through.

Ever since Disney's Marvel takeover, rumors have circulated that the company will construct an all-new park dedicated to its range of superheroes at one of its resorts. The Disneyland Resort, Shanghai Disneyland and even the cash-strapped Disneyland Resort Paris have all been touted as potential locations, although no firm plans have surfaced to date.

With the acquisition of LucasFilm, the tantalising prospect of an entire Star Wars park suddenly appears to be on the cards - and provides the genuine hope of a major franchise worthy of competing with Universal's success with the Wizarding World of Harry Potter.

Blend the two, together, though, and Disney could have a truly dynamite proposition on its hands. Sci-fi fans from across the world would surely flock to a park that combined Iron Man with Luke SkyWalker, and the Avengers with Darth Vader? The costs could be astronomical, but Disney will surely at least be considering the idea.

While many Disney fans have greeted the news of the LucasFilm deal with glee, others have claimed that (along with the Pixar and Marvel deals that preceded it) it is another example of the company's declining internal creativity. There's little doubt, though, that the potential implications for its theme park business are huge.

What are you hoping for most from the Disney-LucasFilm combination? Let us know through the comments section below.