Disney's Art of Animation Resort is now fully open to the public, with the Little Mermaid wing having made its debut on September 15, 2012.

The wing was the last of four to open at the new Walt Disney World resort, which aims to offer affordable accommodation for families. Themed around animated classic The Little Mermaid, it boasts 864 standard hotel rooms, along with giant recreations of characters from the movie. 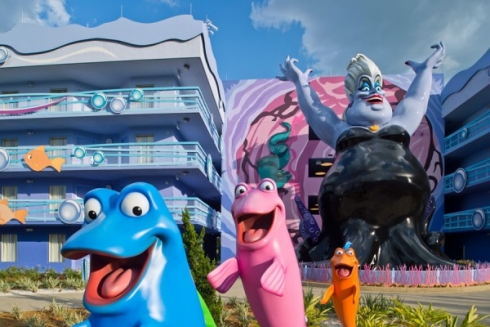 The resort's other three wings are themed around Finding Nemo, Cars and The Lion King. Each boasts a central courtyard populated by oversized icons from the Disney movies.

In total, Disney's Art of Animation Resort features 1,120 family suites, as well as the standard hotel rooms in the Little Mermaid wing. Walt Disney World is aiming to compete with nearby "value" resorts such as the Nickelodeon Suites Resort in Orlando, and has reused unfinished buildings that were originally earmarked for a second phase of construction of Disney's Pop Century Resort.