The grotto will be housed in the rocks that will prop up Prince Eric's Castle, which will host the Under the Sea - Journey of the Little Mermaid dark ride. It will enable guests to meet Ariel, the lead character in The Little Mermaid, who will be perched on a seashell-themed throne.

Ariel's Grotto will officially debut to the public on December 6, 2012, along with a host of other new attractions in the New Fantasyland area. Previews aimed at Cast Members, Disney Vacation Club members and Annual Passholders will commence on November 19. 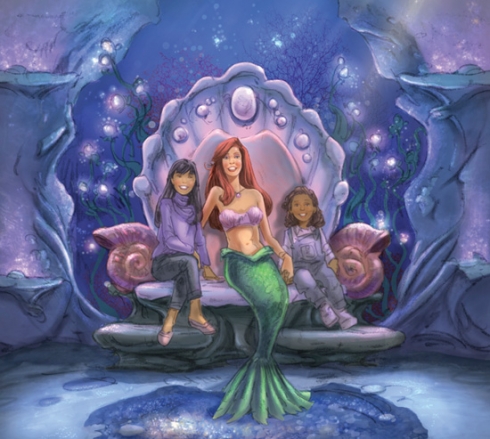 Under the Sea - Journey of the Little Mermaid will be almost identical to The Little Mermaid: Ariel's Undersea Adventure at Disney California Adventure. Using an Omnimover ride system similar to that employed by the Haunted Mansion, it will take guests through a series of scenes that retell the story of the animated movie.

Although Disney is billing the December 6 date as the grand opening of the expanded "New Fantasyland", it won't be fully completed until the debut of the Seven Dwarfs Mine Train roller coaster in 2014.