Disney has revealed new details of the updates that are currently being made to Epcot's Test Track, including an image of the ride's revamped entrance marquee.

In a live chat on the Disney Parks Blog, Melissa Jeselnick, Assistant Project Manager for the Test Track refurbishment, discussed the changes. The ride has been closed to the public since April 16, and is expected to reopen in Fall 2012 with new Chevrolet branding.

The Chevrolet logo will feature prominently in the marquee, which will placed outside Test Track's entrance: 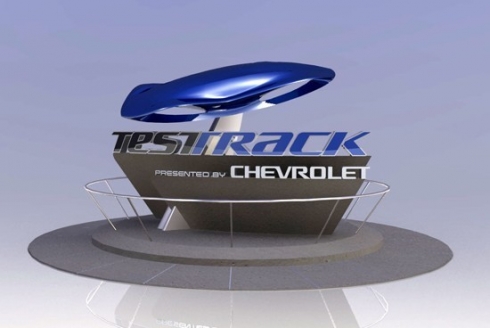 Jeselnick also discussed Test Track's queue area, which will be completely overhauled as part of the refurbishment work. Previously a "test workshop" area, it will now become the "Chevrolet Design Center at Epcot". While they wait to ride, guests will be able to use interactive kiosks to design their own vehicle, which will then be compared with the "real" design used for the ride cars. Riders using Disney's FASTPASS to skip the queue will select from one of a number of pre-designed cars.

Test Track's circuit is set to receive no major updates, although the special effects surrounding it will be changed. The "tests" carried out on the vehicle will be divided into four segments: Capability (testing the car's handling on rough roads and different weather conditions), Efficiency (testing the vehicle's environment footprint), Responsiveness (testing maveuverability) and Speed (pushing the car to go as fast as it can).

The updated Test Track will feature Chevrolet vehicles and branding, in place of the previous vehicles that were themed around parent company General Motors.

Opened in 1999, Test Track takes guests through a simulated set of tests on a new car. It sees guests seated in mock cars as they traverse a set of low-speed indoor tests before racing at speeds of up to 65 miles per hour around an outdoor section.

I love Test track! And I can't wait to see the new test track marquee and the ride as well for Dec 2012!