Walt Disney World has announced that it is to launch a trading card game based on Sorcerers of the Magic Kingdom, the interactive experience that debuted in February 2012.

The trading card game will enable guests to collect rare "spell cards" that cannot be acquired for free by playing the in-park game. It is being developed by Disney Theme Park Merchandise, which is aiming to capitalise on the popularity of Sorcerers of the Magic Kingdom.

Guests potentially face a significant expense in order to complete their card collections, with 10 rare spell cards (numbered 61-70) to collect. A minimum of 1 of these will feature in each 7-card trading pack, which will retail for $11.95. 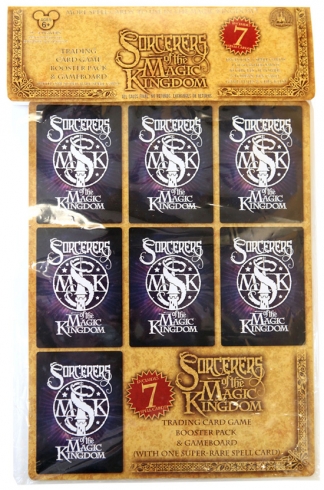 The trading card game will be playable at home using one of four game boards, featuring Maleficient, Dr. Facilier, Jafar and Cruella DeVil. Players will be charged with trying to reduce each Disney villain's power level, with the game being targeted at players aged 6 and up.

The in-park version of Sorcerers of the Magic Kingdom challenges players to become apprentice sorcerers for Merlin the magician, before helping him to overcome an army of Disney villains that are threatening the park.

Players use special playing cards to cast spells, as well as searching for magic symbols that lead them to the villains' hiding places. 60 different spell cards are available, with guests receiving five free cards when they sign up to play.