Rumors that a temporary attraction based on the smash-hit show would form part of this year's line-up had been circulating for months, and Universal has now moved to confirm them. The company's announcement comes hot on the heels of the news that a horror maze based on the Silent Hill video game series will also be hosted at both parks during the events.

The Walking Dead tells a familiar story of a world that been overrun by zombies, and could be likened to an episodic version of George A. Romero's Living Dead movies. The maze will feature a number of scenes that will be familiar to fans of the programme, and will be populated by horses of the "undead".

An official teaser trailer for the Walking Dead maze is embedded below:

One iconic element from the series that will be recreated as part of the maze is the infamous "Don't open dead inside" doorway. Concept artwork for the door has been released by Universal, and is shown below. 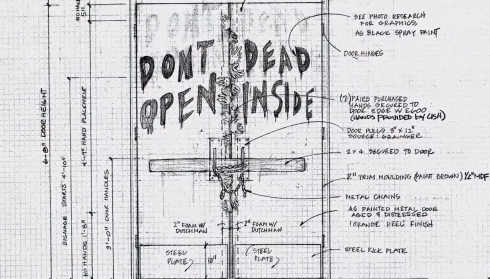 During Halloween Horror Nights, areas of Universal Studios Florida and Universal Studio Hollywood are dressed up as "haunted houses" and "scare zones". Fans of the House of Horrors attraction at Universal Studios Hollywood will know what to expect, with real actors mingled in with the guests to create genuinely unpredictable scares. This year's events will kick off on September 21 at both parks.