Walt Disney World has released a new image showing off the near-complete exterior of Prince Eric's Castle, part of the expanded Fantasyland at the Magic Kingdom.

The structure will house the new Under the Sea - Journey of the Little Mermaid ride, and is designed to resemble the castle as seen in animated classic The Little Mermaid. It is the second castle to be added to Fantasyland as part of the ongoing expansion work, along with Beast's Castle (which will house the Be Our Guest restaurant).

As with Beast's Castle, a forced perspective effect is used to make Prince Eric's Castle appear larger than it actually is. The same principle was employed by Universal Orlando when constructing Hogwarts Castle at the Wizarding World of Harry Potter. 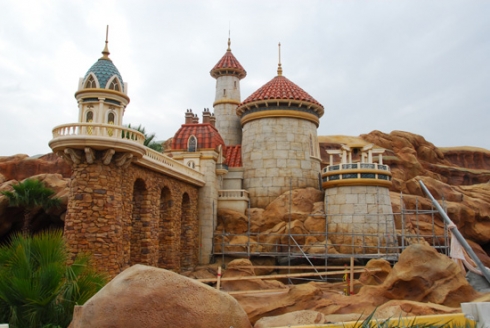 The concept art below, posted to the Disney Parks Blog, shows the expected final appearance of the entrance to Under the Sea - Journey of the Little Mermaid. 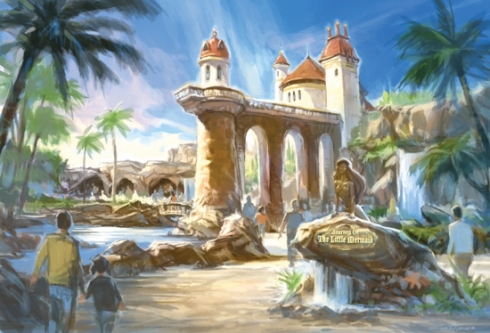 Under the Sea - Journey of the Little Mermaid will be almost identical to The Little Mermaid: Ariel's Undersea Adventure, which opened at Disney California Adventure on June 3, 2011. It will feature an OmniMover ride system similar to that seen used in the Haunted Mansion ride, and will retell the story of the movie.

The Little Mermaid ride is one of the headline attractions in the Fantasyland expansion, and is due to debut in late 2012. The expansion will be completed in early 2014 with the opening of the Snow White-themed Seven Dwarfs Mine Train roller coaster.